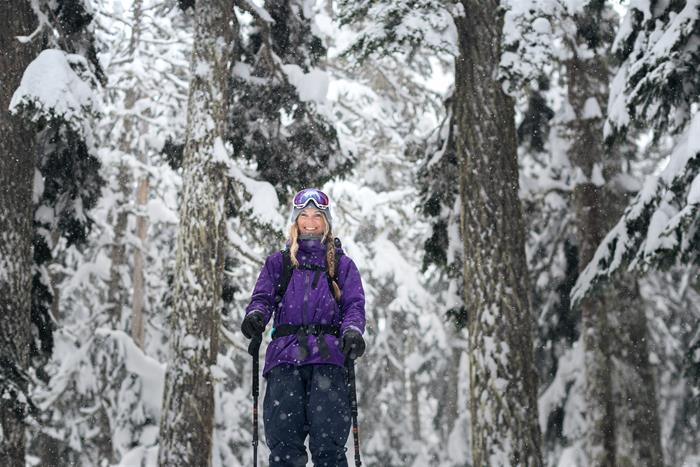 Skiing since age one, Parker grew up in the foothills of the Sierras. Originally a ski racer turned freeski athlete, Parker has competed and podiumed on all platforms, from racing in the Junior Olympics to dominating the Slopestyle and Halfpipe events at the X-Games. Her transition to big mountain and, most recently, expedition based ski adventures evolved from a connection to the mountains that competitions, gates and tabletops did not fulfill.

Parker has filmed with the likes of Warren Miller and Matchstick Productions and is sponsored by other brands including Red Bull, Black Crows, Anon, Squaw Valley, and Arcade. Some of Parker’s up and coming trips include a climbing trip to Yosemite with Emily Harrington and a trip to the Kitchatha Range to clock some first descents with Chris Davenport, Christian Pondella, and Jim Morrison for Powder Magazine.

“Partnering with Arc’teryx is the best possible fit for how I’ve always approached skiing,” said Parker. “My connection to the mountains has always been the strongest force throughout my ski career, and that draw is as strong as ever right now. Working alongside a company whose moral values are the same is extremely encouraging and certainly will help both of us prosper in attaining our goals and following through with our visions.”

“Our new partnership with Michelle is a perfect fit,” said Justin Sweeny, the Arc’teryx Athlete Manager. “It achieves our goal of improving gender balance and complements our current women’s athlete program. Her experience, trajectory and approach to the mountains as well as her radiant personality will be a great addition to the team.”