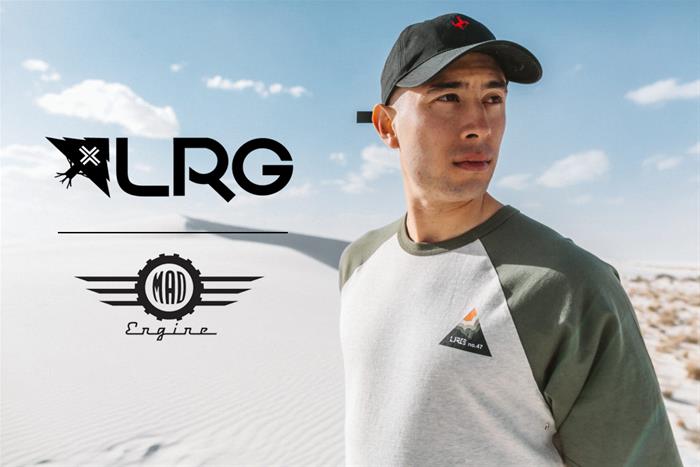 Mad Engine has expanded substantially since its founding in 1987, from a small t-shirt supplier in Southern California to a best-in-class design, merchandising and distributor of licensed apparel, catering to the needs of a wide spectrum of retailers. The company has gained full vertical capabilities over the past 30 years, enabling greater control over sourcing and the supply chain, as well as providing reliability and predictability to customers. In more recent years, Mad Engine has diversified product offerings by launching additional divisions outside of its core male/kids apparel business to include female apparel and adult loungewear/underwear. Mad Engine also expanded its horizon globally by acquiring Xtreme Worldwide to serve as the foundation of its International Business Division. Today, Mad Engine is excited to formally announce Mad Engine’s newest business venture into branded apparel space.

“The Mad Engine team is excited about the opportunity to bring LRG on board. It is a brand many of us grew up wearing and have supported over the years and feels like a natural fit for our first venture into branded apparel,” said Danish Gajiani, CEO of Mad Engine. “The experience of the LRG team and sound infrastructure will serve as a solid foundation and platform to launch the branded division and bring on many additional brands in the future.”

“In the months we have spent getting to know each other Mad Engine has shown a commitment to LRG’s future. I am optimistic about this new chapter which creates the ability to grow the LRG brand and creates new opportunities and experiences for those involved,” said LRG Co-Founder Robert Wright. “Further, Intrepid’s Apparel & Retail investment banking team was an invaluable advisor to us as we sought a partner that could provide us with value-added resources and capital commitments to continue accelerating the company’s growth,” added Robert. “We are excited to join the Mad Engine family.”

LRG started in a 300-square foot warehouse in Santa Ana, Calif. The founders had an idea of creating a brand that would be a bridge between skateboarding and hip hop, which at the time had not been done. LRG was an immediate success with tastemakers and influencers and over the next several years grew into a globally recognized brand, forever changing the landscape of young men’s fashion. Today, LRG is known as the originator of what is now commonly known as “streetwear.”