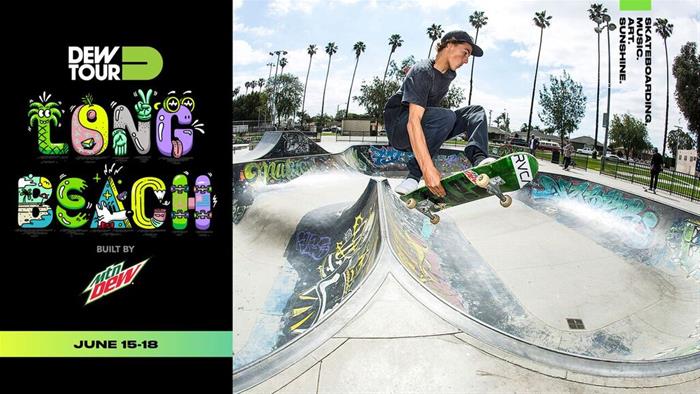 Mountain Dew® and TEN: The Enthusiast Network announced today that its summer Dew Tour skateboard competition and festival will host a FREE all-ages outdoor concert on Saturday, June 17 outdoors at Rainbow Lagoon Park in Long Beach, part of the event’s weekend festival grounds. The concert will feature hip hop artists Metro Boomin, Cam’ron and another artist to be announced soon. The concert is part of the multi-day skateboarding competition and celebration in Long Beach, Calif. to be held June 15-18.

Dew Tour’s 2017 summer skate competition and festival is a FREE four-day weekend celebration where skateboarding’s best professionals, amateurs, and teams compete on a four-part course. There’s also an interactive sponsor village, a craft beer and food festival with an outdoor concert area and public skate park. More than 50 of the world’s best skateboarders are scheduled to compete at the event located in downtown Long Beach.

The outdoor concert is open to all ages and will take place within the Dew Tour’s festival grounds. Gates open at 6 p.m. and the concert will take place at 7 p.m. While the event is free, all concert-goers must download a ticket via the Dew Tour app presented by Moto Z Droid.

Fans looking for the ultimate experience at this summer’s Dew Tour can purchase VIP Experience passes. VIP passes give fans access to exclusive viewing areas that will get them up-close to all of the action, athletes and courses, the Saturday night concert and beverages. Complete details can be found at DewTour.com.

From his work with artists like Future, ?The Weeknd, Drake and ?Big Sean to his world travels, Metro Boomin - at only 23 years old - has proven himself to be arguably the most in-demand and prolific producer and DJ in hip-hop. In the past 12 months alone, the St. Louis-native has delivered Savage Mode, the breakout collaborative album with ?21 Savage, produced four songs on ?Kanye West's The Life Of Pablo and produced his first-ever Billboard Hot 100 #1 with Migos's "Bad & Boujee.”

Over the past 20 years, Grammy-nominated rapper, actor and entrepreneur Cam’ron has released seven studio albums and collaborated with countless rap and hip hop greats. He dabbles in acting and directing, having appeared in Damon Dash's Paid In Full as well as his own film Killa Season. Not only will his new mixtape The Program drop in May, but his anticipated album and sequel Killa Season 2 is expected to be out later this year, as well.

Dew Tour is an innovative contest series and content platform that brings together the world’s best skateboarders, snowboarders, skiers, artists, brands and fans in a celebration of creativity and style.

About TEN: The Enthusiast Network