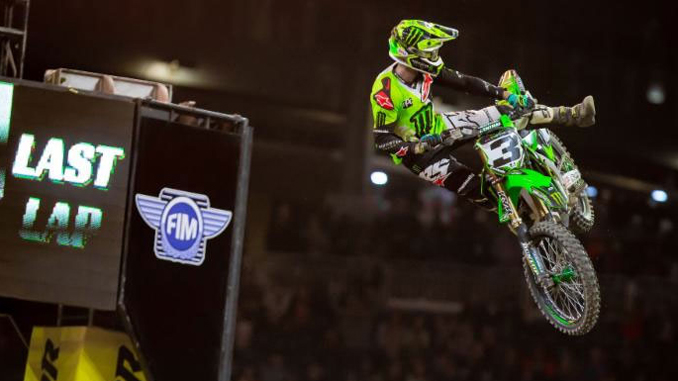 The 2018 schedule provides greater access with eight races in the Mountain or West Coast time zones and nine in the Central or East Coast. Destinations include a return to Foxborough after a one-year hiatus and a visit back to Houston, last event in 2015. The brand-new Super Bowl-sized Mercedes-Benz Stadium in Atlanta will be one of the premier races as the series swings through the Southeast and also stops in Tampa for the first time since 1999. This change will be a highlight as Florida is now home to many of the top Supercross athletes including Chad Reed, Marvin Musquin, Jason Anderson, Zach Osborne and Malcolm Stewart.

Going into its fifth year, all of the racing will continue to be broadcast on the FOX family of networks. Monster Energy Supercross concluded 2017 with a record-breaking TV season in which Supercross had its largest audience of all time with ratings up 13 percent year-over-year. 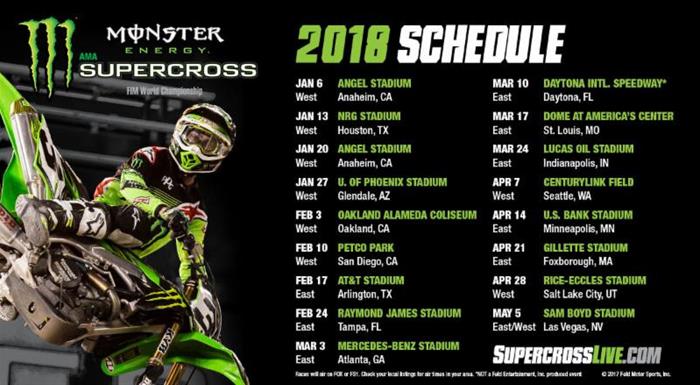 “Monster Energy Supercross draws nearly 50,000 fans on average per race and more than 800,000 fans experienced the spectacle in person last season,” said Nicole Feld, Executive Vice President, Feld Entertainment. “Our goal is continued growth of the sport and with this schedule we believe we can surpass the 1 million mark in live attendance in 2018. Hosting races in more of the country’s larger capacity stadiums around the U.S. will allow us to expand the reach of the sport.”

“The athletes of Monster Energy AMA Supercross, an FIM World Championship, are among the most skilled and talented in the world and this schedule provides a worthy showcase for what certainly will be another season of stellar racing,” said AMA President and CEO Rob Dingman. “As we saw in the recently wrapped up 2017 season, the race for the coveted 2018 AMA Supercross No. 1 plate will begin in Anaheim and most likely extend through the finale in Las Vegas. We are pleased to continue to partner with Feld Entertainment on bringing the most exciting indoor motorsport on the planet to race fans, as well as the AMA amateur racers across America who hope to one day line up for an AMA Supercross Main Event.”

The unparalleled fan experience of Monster Energy Supercross isn’t over for 2017 just yet. Fans can expect an epic battle among the sport’s top competitors at the Monster Energy Cup on October 14 at Sam Boyd Stadium in Las Vegas where racers compete for the largest purse in motorcycle racing, a $1 million payout.

Tickets for the 2018 Monster Energy Supercross season will go on sale Tuesday, October 24, 2017.

“With the retirement of reigning Supercross World Champion Ryan Dungey, we can expect to see a thrilling competition among the many excellent riders vying to become his successor,” said FIM President Vito Ippolito. “Eli Tomac, Marvin Musquin, Ken Roczen, Jason Anderson, Davi Millsaps, Blake Baggett, Cole Seeley, Dean Wilson, Chad Reed and Cooper Webb – to name but a few – are among those who will have to stand up to the rigors of a demanding series that will spread over 17 events if they are to emerge on top. As always, Feld Entertainment has set the scene for a new campaign that will take off in Anaheim next January and end in Las Vegas in May. So, who will be the next Champion of Supercross? Only time will tell, but we can be sure that there will be some hugely exciting action along the way.” 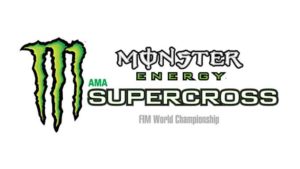 Feld Entertainment is the worldwide leader in producing and presenting live touring family entertainment experiences that uplift the human spirit and bring people together. With 30 million people in attendance at its shows each year. Feld Entertainment’s productions have appeared in more than 75 countries and on six continents to date and include Monster Jam®, Monster Energy Supercross, AMSOIL Arenacross, Disney On Ice, Disney Live!, Marvel Universe LIVE! and Ringling Bros. and Barnum & Bailey®. More information about Feld Entertainment is available online at www.feldentertainment.com.

About the American Motorcyclist Association

Founded in 1924, the AMA is a not-for-profit member-based association whose mission is to promote the motorcycle lifestyle and protect the future of motorcycling. As the world’s largest motorcycling rights and event sanctioning organization, the AMA advocates for riders’ interests at all levels of government and sanctions thousands of competition and recreational events every year. The AMA also provides money-saving discounts on products and services for its members. Through the AMA Motorcycle Hall of Fame in Pickerington, Ohio, the AMA honors the heroes and heritage of motorcycling. For more information, visit americanmotorcyclist.com.