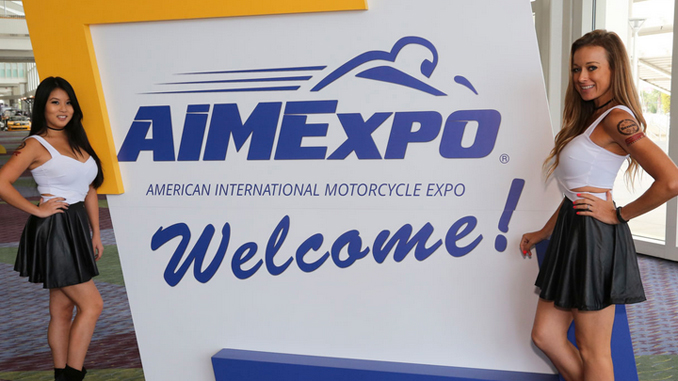 IRVINE, CA – August 18, 2017 – The future of the powersports industry lies with new riders, and how to develop these new riders is a tough yet intriguing challenge the industry must face together. To help address that challenge, AIMExpo presented by Nationwide (AIMExpo) invites dealers, media and all industry attendees to the show’s opening program, where leaders of iconic American manufacturers Harley-Davidson Motor Company and Polaris Industries will share their ideas. The Motorcycle Industry Council (MIC) also will reveal a key initiative toward this goal.

AIMExpo presented by Nationwide will kickstart four days of industry business with “The Future Starts Here” on September 21 at 8:30 a.m. in the Greater Columbus Convention Center in Columbus, Ohio. Opening ceremonies will feature keynote speeches from Scott Wine, CEO of Polaris, and Matt Levatich, President and CEO of Harley-Davidson. The two industry leaders will explore the challenges and opportunities for motorcycling and powersports’ future as we approach the millennium’s third decade.

“The work must begin now to present a powersports riding opportunity that captures the emotion and imagination of the first ride experience to the next generations in America,” said Tim Buche, CEO of the MIC, which produces AIMExpo. “The moment has arrived for everyone in this great industry to have a role in building the road to our future, and we’re excited to welcome the leaders of legacy American brands Harley-Davidson and Polaris to America’s premier show as we define the way forward.”

AIMExpo presented by Nationwide is where all the industry’s stakeholders – dealers, manufacturers, aftermarket and media – converge to share not only what products and services will be part of the business in 2018, but also to address shaping the state of the business beyond 2018 and into the future.

“Plotting the path ahead and addressing the real challenges of our collective business starts with coming together,” said MIC Events VP and general manager Larry Little. “There will not be a better opportunity for the industry to meet face-to-face and discuss these issues than AIMExpo presented by Nationwide this September in Columbus.”

The opening program begins at 8:30 a.m. and is open to all exhibitors and trade visitors with a trade credential. Doors to the show floor will open to trade visitors at 10:00 a.m. following the program.

About the Motorcycle Industry Council

The MIC is headquartered in Irvine, California, with a government relations office in metropolitan Washington, D.C. First called the MIC in 1970, the organization has been in operation since 1914. Visit the MIC at www.mic.org.

Nationwide, a Fortune 100 company based in Columbus, Ohio, is one of the largest and strongest diversified insurance and financial services organizations in the U.S. and is rated A+ by both A.M. Best and Standard & Poor’s. The company provides a full range of insurance and financial services, including auto, commercial, homeowners, farm and life insurance; public and private sector retirement plans, annuities and mutual funds; banking and mortgages; excess surplus, specialty and surety; pet, motorcycle and boat insurance. For more information, visit www.nationwide.com.

Nationwide, Nationwide is on your side and the Nationwide N and Eagle are service marks of Nationwide Mutual Insurance Company.