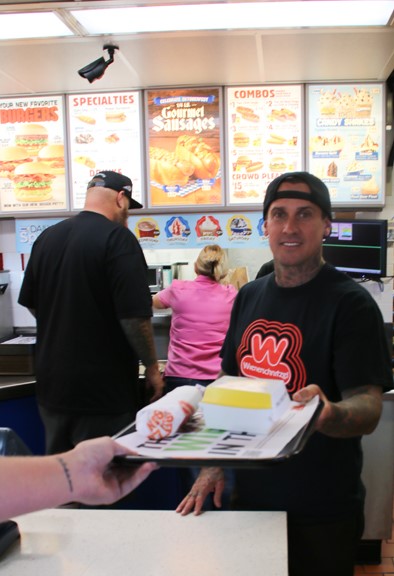 Over the weekend, professional freestyle motocross legend, Carey Hart hosted his “Good Ride Rally” and worked at Wienerschnitzel in his hometown to raise funds for the Infinite Hero Foundation. Check out the video recap

Carey Hart said, “I have a super guilty pleasure of Wienerschnitzel…it’s been a great opportunity to literally get my hands dirty and do restaurant takeovers.”

On Friday, Carey served up fans and surprised local Wienerschnitzel customers who came in to order and dine with the professional freestyle motocross legend. Carey took over one of the Las Vegas locations and worked alongside its staff to serve its customers. Proceeds raised from Carey’s donated time will benefit the Infinite Hero Foundation. Wienerschnitzel has also set to match the total amount raised from the event; bringing the total amount donated to $2,000.

In addition to the efforts Carey put in at Wienerschnitzel, he hosted his “Good Ride Rally” on Saturday – that kick started at Sin City Indian Las Vegas. Running from 8:30 a.m. until 2:30 p.m., Carey and dozens of supporters came out to ride and donate funds towards the Infinite Hero Foundation that benefits military heroes/veterans’ programs that combat mental and physical rehabilitation.

Wienerschnitzel President, J.R. Galardi said, “On behalf of the wiener fam, we’re grateful to have Carey come out and support Wienerschnitzel and help raise funds for Infinite Hero. It was awesome to see him serve up the world’s most wanted wiener, the kid’s a natural.“