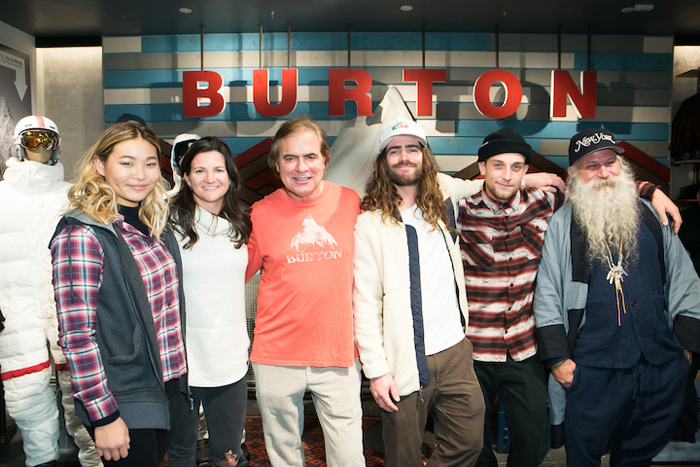 With less than 100 days until the opening ceremony of the upcoming Olympic Winter Games, Burton Snowboards is proud to officially unveil the 2018 Olympic uniforms to be worn by the U.S. Snowboard Team. PyeongChang 2018 will mark the fourth consecutive Olympic Games where Burton has partnered with U.S. Ski & Snowboard to create one-of-a-kind uniforms for the halfpipe, slopestyle and first-ever big air snowboarding competitions.

“The sport of snowboarding is neither nationalistic nor team-oriented in nature; however, all of that changes for a minute every four years during the Olympic Games,” said Jake Burton, Founder and Chairman of Burton Snowboards. “If the global expectations are that U.S. snowboarders represent their country in a uniform, then Burton wants to design and manufacture it. By doing so, we assure U.S. riders that they will have outerwear they can trust to perform at the highest level with a look they have input into and ultimately respect. Simply put, they want snowboarding outerwear, not athletic wear, and who better than Burton to provide it.”

Inspired by the rich history of the American space program, the 2018 U.S. Snowboard Team uniform is both innovative in function and retro-futuristic in design. On the futuristic side, both the competition jacket and pant have a liquid metal look, thanks to an exclusive iridescent silver fabric coated in very fine, real aluminum. Burton custom developed the fabric solely for the 2018 uniform by infusing an extremely lightweight aluminum-coated fabric typically used for audio equipment with highly technical properties ideal for snowboarding in any weather condition. The end result is a super technical, lightweight and waterproof fabric that reflects and deflects light as well as sound. Next, to pay homage to the spirit of the American space program, the competition jacket also features hand-drawn patches depicting the American flag and ‘USA’ in space-age font. Even the inside of the jacket is highly detailed, with artwork sewn to the lining that includes Korean translations of helpful lighthearted phrases like ‘Do you speak English?’ and ‘Wish me luck!’. 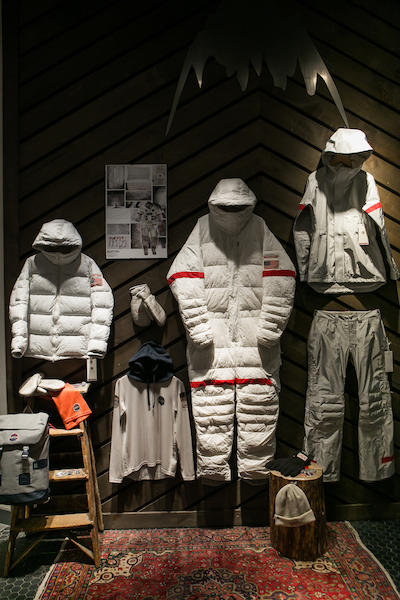 In addition to the competition jacket and pant, two stand-out pieces in the uniform collection include a spacesuit-inspired down one-piece and village down jacket, both created with bright white non-woven Dyneema® fabric, which is the world’s strongest fiber. Extremely lightweight, breathable and waterproof, the fabric itself has a very space-age feel inspired by the iconic 1960s moonwalk suit with a texture that breaks in over time, giving it a weathered look. To wear with the competition jacket and pant, Burton also created a super soft fleece jacket and pant made with custom Polartec® High Loft™ fabric that was originally created for the U.S. military. The uniform also includes a lightweight down insulator in a ‘moonbeam’ colorway and drirelease wool base layers in ‘international orange’, a signature color used by the American space program for astronaut suits. Leather mitts, fleece gloves, tech tees and beanies complete the uniform.

“This is the fourth Olympic uniform that Burton and myself have had the distinct pleasure of working on,” says Greg Dacyshyn, Head Designer of Burton’s Olympic uniform program. “Like the previous three which had a retro inspired influence, the 2018 theme is also a heavy nod to Americana, because its main influence is the iconic suits of the United States’ leading space exploration program. I have always loved the astronauts’ suits, because not only do they have such a cool and amazing aesthetic, they also were designed to function under the most extreme conditions, so this gave us an incredible platform to push the innovation and technology of the garments as well. My hope is that these pieces help the athletes go where no rider has gone before.”

“As one of the most recognized global brands in snowboarding, Burton brings tremendous value to our Olympic snowboard team with both its product quality and brand essence,” said U.S. Ski & Snowboard Chief Commercial Officer Dan Barnett. “We have very ambitious targets for all our athletes in South Korea. Success at the highest level of global competition comes from acute attention to detail and we know that Burton shares that philosophy. The shared vision Burton has with U.S. Ski & Snowboard and our world class roster of athletes is another of the vital building blocks being put in place to help our athletes achieve the medal targets set for PyeongChang.”

The U.S. Olympic Snowboard Team will be nominated based on a series of selection events this season including the three-stop Toyota U.S. Grand Prix with stops in Copper Mountain, Aspen/Snowmass and Mammoth Mountain.