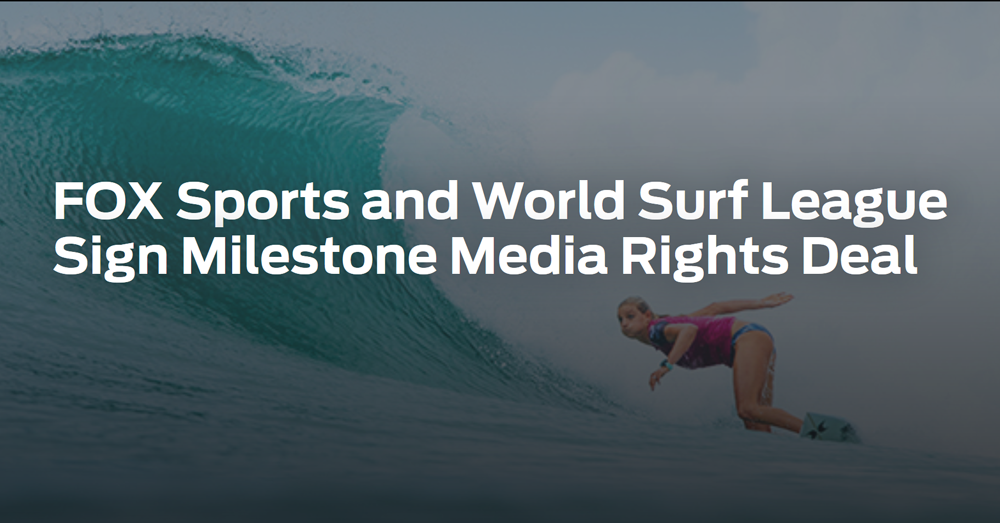 Today, FOX Sports and the World Surf League (WSL) announce they have reached an agreement making FOX Sports the exclusive U.S. television broadcaster for WSL’s 2019 Men’s and Women’s Championship Tour (CT), as well as the Big Wave Tour. FOX Sports will telecast more than 500 hours of WSL programming, including live contests and highlight shows, across FOX, FS1, FS2 and the FOX Sports app in 2019.

“The World Surf League gives us the opportunity to present the world’s best surfers to our audiences,” said Bill Wanger, EVP of Programming, Live Operations and Research, FOX Sports. “FOX Sports has a long history with the World Surf League, and we’re excited to be working with them again, featuring these great athletes in some of the most exotic locations around the world, live on television.”

"We’re delighted with the additional coverage FOX Sports will bring to our events and millions of fans across multiple platforms," said WSL Chief Executive Officer Sophie Goldschmidt. "With our athletes continuing to take the sport to new performance levels, more people than ever can now witness the excitement of professional surfing and everything that comes with our world class events.”

The WSL Men’s and Women’s Championship Tours begin on Wednesday, April 3 in Australia with the men’s Quiksilver Pro Gold Coast and women’s Boost Mobile Pro on FS2 and the FOX Sports app. FS2 will telecast all Championship Tour contests live or close to live throughout the year.

FS2 will also present the US Open of Surfing, the premiere men’s and women’s Qualifying Series contest that takes place in Huntington Beach, California each summer from July 27 to August 4. In addition, FS1 will feature eight, one-hour highlight shows after select contests are over. Check local listings for show times and dates.

Longtime WSL play-by-play announcer Joe Turpel and former world champion Martin Potter call the action from some of the most remote and exotic surfing locations in the world. Rosy Hodge (former Champions Tour competitor) and Strider Wasilewski serve as commentators reporting from the water. In addition, Ross Williams and big wave champion Peter Mel round out the commentary team.

Viewers in the U.S. can live stream all WSL shows on the FOX Sports app. The shows are available on desktop at FOXSports.com and through the app store or on connected devices including Apple TV, Android TV, Fire TV, Xbox One and Roku.