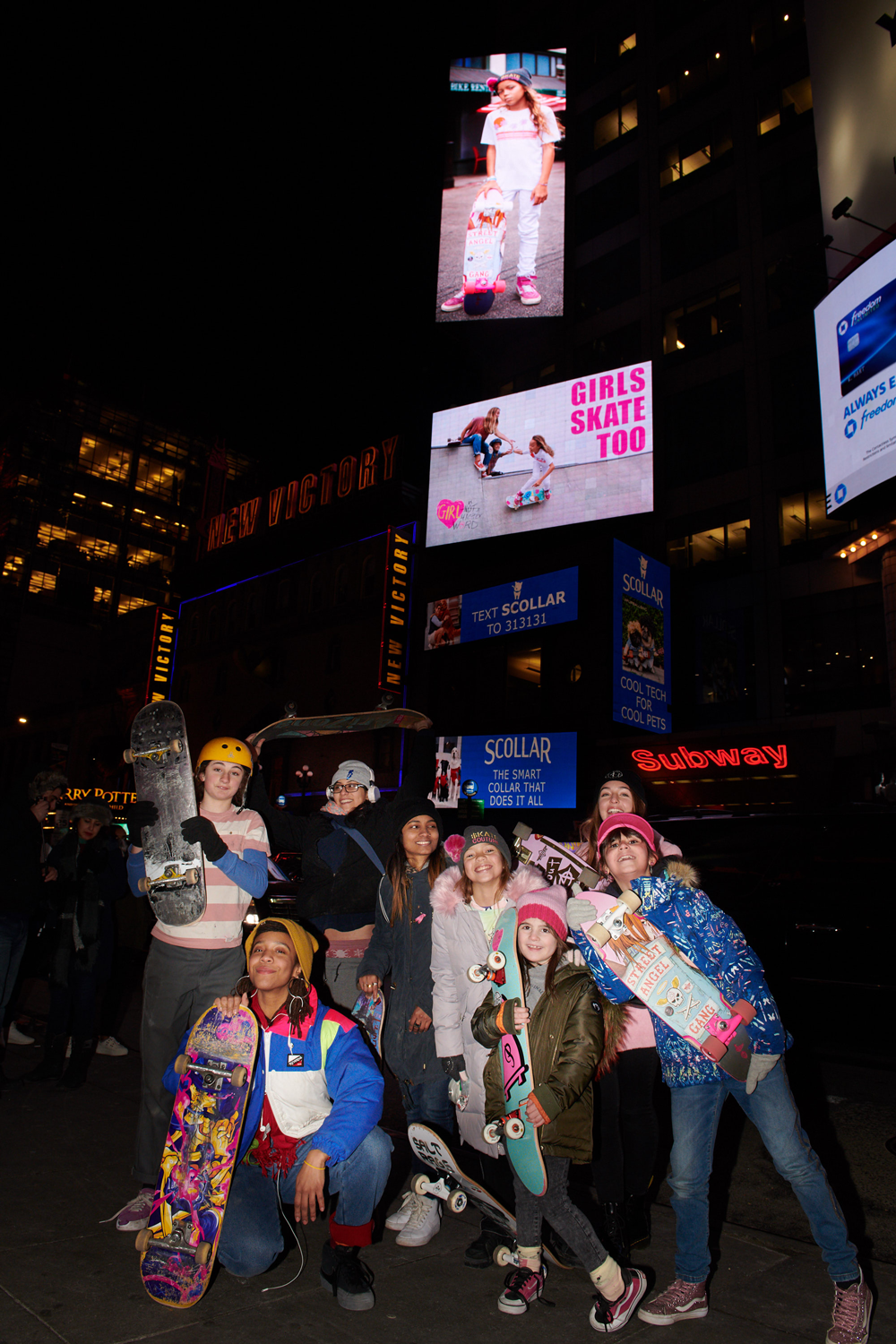 The young female skateboarder flies through the bowl, hair steaming behind her, smiling and “high fiving” her two friends who sit on the edge cheering her on. In another image, she stands with her skateboard looking at down at the pedestrians below, with an unapologetic look that says, “I’m here, I skate and yes, I am a GIRL”. These are not the usual images one sees every day on the digital billboards flashing in Times Square.

These billboards not only feature skateboarders, they showcase female skateboarders, a rarity in magazines and never on billboards. Yet there they are at rush hour in Times Square where they cannot go unnoticed. The bright pink lettering on the lower billboard says “GIRLS SKATE TOO” making it known that, yes, girls are out there and just because you don’t see them in mainstream visuals, they are charging just as hard as their male counterparts.

“It’s time we start creating the change we wish to see, and I had this crazy idea about putting up huge billboards in Times Square, and thought, why not?” said Cindy Whitehead, pro skateboarder and founder of Girl is NOT a 4 Letter Word. “ These girls are rad. They are fearless and they are renegades. They are smashing stereotypes into a million pieces, and they are authentic and real. They are kicking the ass out of social norms, so it felt like this would be a really great way to show that, as well as a perfect way to kick off Women’s History Month.”

Cindy Whitehead has led the fight for women’s equality in skateboarding ever since she conquered the male-dominated profession of pro-vert skateboarding in the 70’s. To this day, she is still the only female to be featured in the centerfold of a skateboarding magazine with a two-page article, her skateboard history has been taken into the Smithsonian’s National Museum of American Sports History collections, and her TEDx talk has empowered girls everywhere. Cindy was inducted into the Skateboarding Hall of Fame on May 13, 2016 with an introduction by legendary feminist, and Rock & Roll icon, Joan Jett. Cindy is the author of the book “It’s Not About Pretty: A Book About Radical Skater Girls” and is the founder of the movement “Girl is NOT a 4 Letter Word” whose goal is to give girls in action sports the same opportunities and recognition as their male counterparts.

“Women and girls in skateboarding should be seen and celebrated,” says Whitehead, “it was awesome to see female skateboarders from California as well as New York come out on Thursday night to view and celebrate these billboards as a collective group – it wasn’t about who was on the billboards, it was about the fact that they were finally seeing skater girls like themselves, larger than life.”

The two digital billboards were located at 42nd Street and 7th Avenue facing South East on the evening of Thursday, February 28, 2019 – the night before Women’s History Month began.