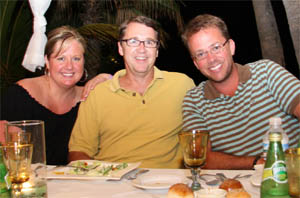 Atlanta, GA – May 29, 2007 – Surf Expo, a division of dmg world media, is pleased to announce that industry veteran Sean O’Brien has been named Online Marketing & Communications Manager for the show. (Pictured from left to right: Lori Kisner, Roy Turner, and Sean O'Brien)

O’Brien previously served as Editor/Chief Content Director of TransWorld Business, which he launched in 2004. O’Brien also was the editor of TransWorld Surf Business from 2000 until 2004, and spent four year as managing editor of TransWorld SNOWboarding Business. “We are extremely excited by what Sean brings to Surf Expo,” says dmg world media VP Lori Kisner. “Sean has more than fifteen years of experience within the industries Surf Expo serves, and possesses deep relationships with leading manufacturers, retailers, associations, and media outlets. Those attributes will significantly enhance our communications with the marketplace and will help us build a robust online community.”

O’Brien will be based on the West Coast at Surf Expo’s offices in Dana Point, California. According to Roy Turner, Surf Expo’s Director of Client Relations, “I’ve worked closely with Sean over the years through my relationship with the Board Retailers Association. I’ve always been impressed with his understanding of the retail marketplace, his work ethic, and friendly demeanor. For years, Surf Expo has been known as the Board, Beach and Fashion industries’ business-first trade show. Our aim is to broaden the reach and relevance of Surf Expo beyond those seven days of trade shows each year. Having Sean on board will greatly accelerate our progress toward that goal.”

O’Brien’s first task will be to help guide the relaunch of surfexpo.com. “Surf Expo is a great brand supported by great people—industry experts with years of experience and know how. I hope to tap into those skill sets and quickly make surfexpo.com a robust place where information and ideas are exchanged. My goal is to help each retailer and manufacturer in partnership with Surf Expo grow their business and thrive. It’s an exciting time within all of our businesses, and I’m thrilled to be part of such a strong team.”