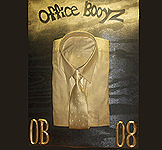 The Office Booyz Phenomenon is taking over!  So much in fact, it has some how temporarily over powered our Industrial Profile that's supposed to be featured here right now.  This crazy juggernaut of an event traveled 1,200 miles south to Bear Mountain, Calif., on Feb. 22, 2008 for its inaugural debut in the United States of America.  Twelve hundred miles, that’s a long, long way to push in an office chair!  Now that’s dedication at an unprecedented level.  Enjoy all the photos, read the story, and mark it on your calender for next year!