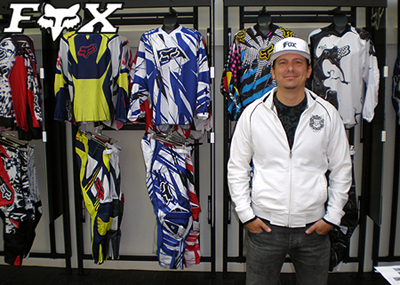 Fox Head, Inc. is easily considered one of the top motocross racewear companies out there, yet it’s their pursuit into the different markets in the ASI that makes them truly stand out from the competition.  Fox is more than just racewear these days; it has become a full-blown lifestyle brand that has infiltrated the realm of action sports, holding its own throughout various segments of the industry.

Pete Fox adds some knowledge about the evolution of Fox, reveals some insight into the current and future state of the company, and offers advice on how to obtain your dream job in the action sports industry.  There’s a reason why Fox made it to the top, so soak it in from one of the best, and read on to learn more.

What put Fox into the top echelon of motocross racewear?

I think it was the mid or early ‘90s that we officially became the number one brand in motocross.  My brothers and I had grown up around the sport, and I’ve learned from the other market leaders.  It just took persistence and determination.

Who was your major competition at the time?

The first company that was clearly the dominant motocross brand was called JT Racing; they sold a long time ago. The second company that passed them was AXO Sport – an Italian company.  They created and invented some new things, and a new way of marketing; it was a really innovative company.  I looked up to both of those companies.  They got to their number one position by doing some things similar, and yet some things quite very different from each other.  They were always product and marketing driven.

Were you guys competing directly with each other?

I don’t think they really cared about us too much at the beginning because we were kind of small.  JT was there at the very beginning of the sport, had 60 percent of the market, and was clearly number one.  They probably didn’t even think about who number two was, that is until AXO became number one.  We just gradually worked our way up.

What has changed about Fox, now that the company is several years into producing apparel, footwear, and sunglasses?

I think that the internal creativity is more diverse than it used to be.  Instead of just having one thing inside the company happening, just like one sport, one product line, there are more diverse products being created here.  Whether it’s girl’s fashion, men’s apparel or boardshorts for all of it, there’s more of a cross pollination of ideas.  I think the company is a lot of fun because there are more things that allow for greater creativity.  In the old days we were kind of limited to making and marketing motocross gear.  The company now makes a lot of different products and the brand image has developed more, so there’s a lot more freedom.  Fox is more than just racing now, it’s a lifestyle company.

What paved the way for Fox to become an international brand?  Did this happen before or after it ventured into different market segments?

We have essentially been an international brand since year one; we’ve always been an international brand.  I think that’s always been one of our strengths.  Motocross started in Europe and came into the U.S. as a sport in the ‘70s, so that allowed us to be an international brand pretty early.  We had a significant part of our business come from outside of the U.S. literally from day one.  The majority of motocross racewear, again since we’re talking about the early days of the company, was an offshoot of hockey, and Finland makes a lot of hockey gear.  So we went from making product in Finland, to Italy, to Asia.  It was a weird transition; it’s always changing.

What’s the next product category to be added?!

We don’t have any real plans to add any other categories.  I think we’ve got a lot of fun, cool products here inside the company.  We have plenty of great stuff to work on.  We always want to make great products and be an industry leader in every category, so it takes a lot of hard work.

Does Fox ever plan, or have plans to break into the skate market?

Skateboarding is a very tight, core market.  I just don’t see us ever going there.  I think to be a “real” skate company you really have to start as a skate company.   My younger brother (Director of Men’s Design, John Fox) is a life-long skater, loves to skate, and he doesn’t ever see us going into skate, even though he loves it; we just respect it.

Growth through acquisition is a popular and viable trend in the action sports industry these days.  Is Fox planning to acquire any companies?

We don’t have any plans to acquire any companies, but never say never you know.  It seems a little more natural for us to start something rather than acquire.  I think growth through acquisition is important for public companies, but we’re a private company.

What are the different challenges faced when developing products such as apparel and footwear, as compared to product development for Fox motocross gear?

They’re very similar, but racewear requires lots and lots of testing – way more testing than a pair of jeans.  There’s the issue of durability, safety and so many more issues with racewear compared to streetwear.

Has there been any challenge internally or externally with the name change from Fox Racing to Fox Head?

No, that’s just the corporate name, there’s not a significant difference.  Maybe just getting people to just say Fox (laughs).

Two major Fox offices exist in Morgan Hill and Irvine, Calif.  What are the fundamental differences between, or purpose of these two offices?  Why not put everything under one roof?

Well the company started in Northern California in the 70’s and has grown to roughly 400 people.  There was never any serious discussion of moving Fox out of Northern California, but for a long time I thought there would be a lot of benefit to being in this (So. Cal) neighborhood because action sports is here and motocross is here.

Why not put everyone under one roof?  We can’t.  You can’t move everyone up north; you can’t move everyone down south.  At first it was a big challenge, especially when you only have five people down here – it was pretty tough.  Now it has its own infrastructure.  It’s not as reliant on Northern California to answer basic questions; it has worked out great.

Are there significant cultural differences or similarities between the two offices?

There are a ton of similarities.  A lot of people moved down here from Northern California, and others have chosen to move up north.  In the early days, when we were first opening the Southern California office, I went to a bunch of different people and departments up there and I said: “Hey, anybody interested in moving down south.  We’re going to grow that if you’re interested.  It’s a great opportunity, and there aren’t many opportunities like this in your working career.  Just let me know and we can start working toward this.”  Some people took me up on it, and a bunch of people said “Nah, I’m cool.”

What are the hardest job categories to find qualified people?

Graphic Designers – without question!  It’s weird you know.  I think part of it is the nature of graphic designers; a lot of them aren’t that ambitious.  They like to do graphics, but then they don’t want to necessarily make a career out of it.  Graphic Design is my favorite thing, so that probably makes me extra frustrated due to the fact that these positions are so tough to fill.  Maybe people don’t realize that it could be a really great career, especially in this industry.

When someone is reading a job description for Fox, what key points should they pay attention to when determining if they are qualified enough to get an interview?

Is there anything we missed, or anything you’d like to add?

I would suggest that people go figure out what company they’ll have a good fit with – personality fit, etc.  That’s what the companies are looking for, you know, looking for someone that’s talented, but also somebody who seems like they’re going to fit in with their employees and share the same passion for life and their career.  This way you know if people are going to like it here, and that they’re going to stay here.  I interview a lot of people who say I got a job with this company and I don’t like it there; I don’t belong there.  And it’s like shouldn’t you have figured that out beforehand.  Then you wouldn’t have wasted your last year there.  Whether you find some people that work there, or do a little research on your own, people can be the most successful if it’s a company they truly like.