Faultline Terrain Park at Mountain High has doubled its production budget for 2008/09 resulting in a wide range of new features that include a massive 20’x20’ wallride. In addition, two new park-specific Prinoth grooming machines costing over $800,000 have been added to ensure more consistent snow products throughout the park. Mountain High has also announced the 2008/09 Team that includes local pros Laurie Currier and Cory Cronk. 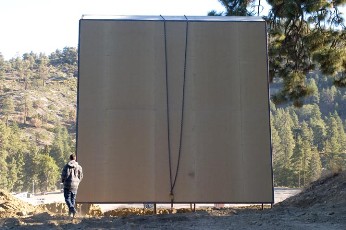 Faultline Doubles Production Budget
Doubling the production budget allowed Faultline to add a wide range of new features including a massive 20’x20’ wallride that is located just above the Playground at Mountain High West. Fully illuminated for night riding, the wallride is a constant symbol of Mountain High’s commitment to park riding. The new feature is made using a Skatelite topsheet material that delivers a consistent riding surface that won’t warp as temperatures rise. Mid-level riders can hit the feature at a level they’re comfortable with while expert riders can slay all 20 feet.

“Faultline has been working hard this summer to complete an arsenal of rider-friendly features for next season,” said Justin Montoya, Faultline Terrain Park Manager. “Riders can find entry-level features off Creek Side lift, while everyone from mid-level riders to pros can progress on Faultline’s wide range of features spread over 100 acres.”

Also joining Faultline’s collection of over 100 features are a 20’ doublewide flat rail, a new rainbow box, and a jump box. Faultline’s boxes and rails have been painted in a bright color palate of solid yellow, blue, red, purple, and orange; reminding everyone that snowboarding is still about having a good time on the hill.

New State-of-the-Art Prinoth Groomers
Over $800,000 has been invested in two new state-of-the-art Prinoth grooming machines this season: a BisonX and a Bison Sherpa Winch. The new cats deliver industry leading power-to-weight ratios, economy in operation, and are more environmentally friendly. Increased productivity and efficiency from the new groomers translates to more consistently groomed terrain on a nightly basis.