Fox Presents Shot In The Pit 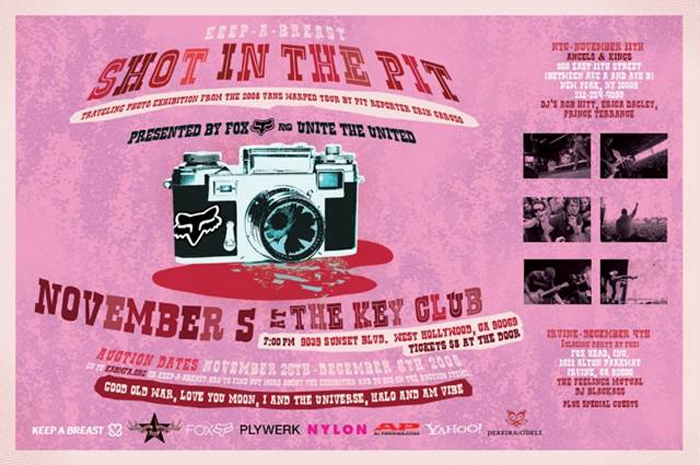 Fox Presents Shot In The Pit

You're invited, this Wednesday at Key Club!

There are three events coming up, details below, hope you can make at least one of them and see the photos on exhibition and up for auction to benefit our friends at Keep A Breast/Music For Awareness.

The Keep A Breast Foundation has partnered with Fox and Unite the United to present Shot In the Pit, a fundraising initiative through Keep A Breast’s Music For Awareness program. Combining art, photography, music, and philanthropy, Shot In the Pit is a touring exhibition featuring band photos from the legendary summer music festival Vans Warped Tour® taken by photographer Erin Caruso. The exhibitions take place at five venues from New York to Los Angeles beginning October 21- December 4, 2008.

“Though the primary focus of the Vans Warped Tour is about having fun, the presence of organizations such as Keep A Breast gives our fans a chance to learn something that could eventually save their lives,” said festival founder Kevin Lyman.

As the Pit Reporter from Vans Warped Tour, Caruso was up close and personal with the bands on the road. From her photo sessions this summer, she has donated over 45 images to the Keep A Breast Foundation. Unite the United will facilitate an online auction of images from the exhibition alongside music memorabilia and celebrity breast casts including Katy Perry beginning November 26. 100% of the proceeds generated from the touring exhibition and the online auction will be donated to the Keep A Breast Foundation’s youth awareness and outreach efforts.

Bands currently involved in the exhibition include: Katy Perry, From First to Last, Paramore, Story of the Year, Shwayze, 3Oh!3, Jacks Mannequin, Mayday Parade, Angels and Airwaves, Gym Class Heroes and All Time Low, to name a few.

According to Tom DeLonge, singer from Blink-182 and Angels and Airwaves, “Never before has a non-profit organization touched me like Keep A Breast. Like millions of others, I have been plagued by the devastating affects of breast cancer hitting not one, but multiple members of my family. Most recently, my aunt Theresa was diagnosed with breast cancer. It is extremely painful to sit and watch, helplessly praying for a life to be saved from an unrelenting, unseen force.”

Keep A Breast launched the Music for Awareness program earlier this year, challenging musicians and promoters to step out of the box and make a difference through benefit concerts supporting the Keep A Breast Foundation’s youth outreach efforts. This program provides bands with a unique way to inspire fans and increase breast cancer awareness and prevention.

“The Keep A Breast Foundation approaches younger people with a message that’s not scary or intimidating, but still very powerful,” said Jim Anfuso, Director of Marketing of Fox. “We were drawn to the Music for Awareness Campaign and the Shot In the Pit shows because it provided us with an opportunity to get involved and raise awareness in a way close to Fox.”

To view band photos and memorabilia up for auction from Shot in the Pit visit Keep a Breast/Music for Awareness.

Los Angeles: November 5th at 7 pm
The Key Club
9039 Sunset Blvd.
West Hollywood, CA 90069
Performances by Good Old War, Love You Moon, I And The Universe, Halos and AM Vibe
Tickets $8 at the door