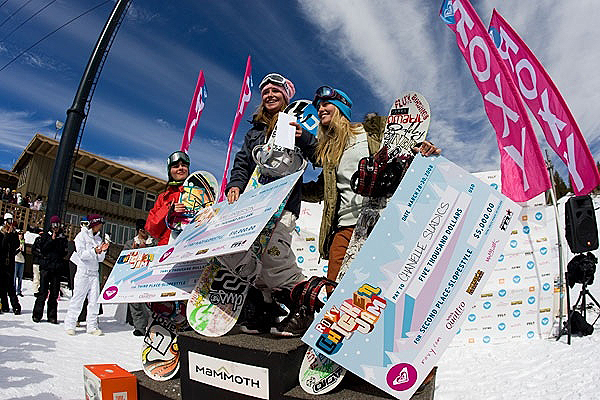 The Fifth Annual Roxy Chicken Jam, presented by ROCKSTAR Energy Drink, returns to Mammoth Mountain March 27-29, 2009 for a weekend of competition and fun. As the final stop of the Women’s TTR World Tour, the Roxy Chicken Jam will crown the 2008/2009 Women’s TTR World Champion. The all-women snowboard event will bring together the top pro women snowboarders from around the world to compete in slopestyle and superpipe events for a combined purse prize worth $50,000.  In addition to awarding titles for each division, the unique event will feature a festival atmosphere with live performances by Santigold and Cold War Kids, a mascot competition, games and goodies for all to enjoy.

“We are excited to be returning to Mammoth Mountain for the Fifth Annual Roxy Chicken Jam,” said Randy Hild, Executive Vice President, Roxy Global Marketing.  “With a stellar lineup of competitors and musicians, the return of the Roxy Chicken mascot competition and the weekend long festival, it’s sure to be an epic event that will not soon be forgotten.”

As a six-star Women’s TTR event, the contest is one of the most prestigious all-women’s snowboard events in the world, and has a crucial influence on the outcome of the Women’s TTR rankings. The best female snowboarders from around the world flock to the Roxy Chicken Jam each year, including top Roxy riders Torah Bright – 2007 Women’s TTR World Champion and 2009 X Games gold medalist; Kjersti Buaas – 2006 Olympic bronze medal snowboarder; as well as top pros Gretchen Bleiler, Kelly Clark, Erin Comstock, Hannah Teter and Alexis Waite.

Continuing upon the popular tradition of previous years, the event will kick off with the open-entry qualifying rounds.  The top five finishers in each division, slopestyle and superpipe, will be entered into the main event to compete alongside the pros for a spot in the super final round and a chance at the crown.

In addition to the competition, the Roxy Chicken Jam will include a winter wonderland festival, featuring a free concert with music guests Santigold and Cold War Kids on Saturday March 28, 2009 at 7pm.  Additional activities over the course of the weekend include the ever-comedic Mascot Superpipe Competition, hair by Paul Mitchell, touch ups by Covergirl, Roxy demo boards and skis, and other giveaways and goodies.