“There were a couple of other guys from ski school racing; we had to beat those guys,” said Steven Mulcahy. “We know the mountain really well. There was only one hike we didn’t know. It was one of those backwater runs we never need to do. It was neat to find a different part of the mountain.”

Each team was tracked using FLAIK GPS, a unique tracking device that allowed race officials to track competitors from their laptops the instant the race kicked off. Results will be posted today, Mar. 2, at http://sunpeakshellyhansen.flaik.com

Mulcahy and Bauer as well as Squaw Valley USA’s winners John Morrison and Alan Riley will travel to Aspen/Snowmass where they’ll square off in the final Battle in the Bowls, March 29. But before that final showdown can occur, the Big Mountain Battle will make stops at WA’s Stevens Pass Ski Area and VT’s Smugglers’ Notch Resort on Mar. 14 and Mar. 21, respectively — and send two more two-person teams on allexpense-paid trips to the Aspen/Snowmass event.

Cost for the event is $75 per team and includes two Helly Hansen Lifa baselayers valued at $45 each. For more info and to sign up go to www.hellyhansen.com/bigmountainbattle. 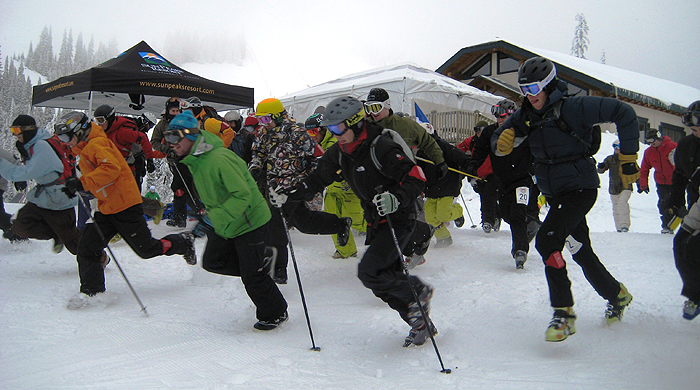