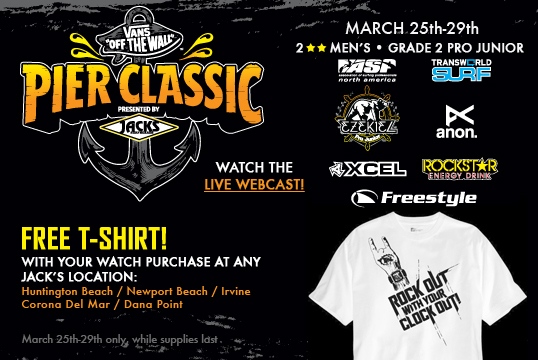 Freestyle, the original action sports watch manufacturer, announces today its co-sponsorship of the 4th Annual Vans Pier Classic presented by Jack’s Surfboards, taking place March 25th-29th at the Huntington Beach Pier in Huntington Beach, Calif. In addition to its interactive booth onsite during the event, Freestyle has created an in-store promotion at all Jack’s Surfboard locations during the duration of the event.

“As two iconic brands, it was a no-brainer for Freestyle to team up with Vans and Jacks Surfboards,” said Freestyle Marketing Director Chad LaBass.  “With a long list of talented surfers and one of the most famous surf breaks in the world, the Pier Classic will undoubtedly be a success!”

During the week long event, Freestyle is offering an in-store promotion at Jack’s, where with the purchase of a Freestyle watch shoppers will receive a free "Rock Out With Your Clock Out" t-shirt (while supplies last).

If you can’t make it to the beach, be sure to check out live webcasts of the entire event at www.vans.com. To learn more about Freestyle please visit: www.FreestyleUSA.com.