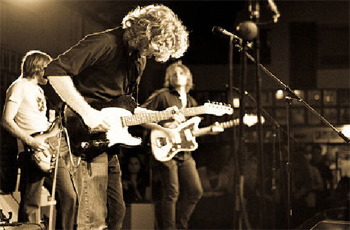 Lightning Bolt surfer, talented musician, gentleman and scholar, Dustin Franks, will unleash his musical prowess upon the world on October 9, 2009, with the release of his self-titled album, “D. Franks.”

“Dustin is a phenomenal surfer, who at age five stormed the San Clemente surf scene on a longboard – he is a driven individual with admirable aspirations beyond surfing, such as nurturing his musical career,” says Jonathan Paskowitz, president of Lightning Bolt, USA.  “We’re lucky to have a well-rounded and talented individual like Dustin on the team who truly embodies what Lightning Bolt stands for.”

Franks, who plays an integral role at Lightning Bolt, is helping to cultivate its surf program and other innovative brand initiatives.  Currently, Franks is filming content for Lightning Bolt’s upcoming webisodes, which will feature surf footage of Dustin and a bit of debauchery with his crew.  Franks has become well-known as both a surfer and musician with a large, almost cult-like following in his hometown of San Clemente and consistently fills venues throughout southern California.  He plans to take his show on the road, starting with his east coast kick-off in New York.

“In addition to the encouragement from family and friends, Lightning Bolt has been super supportive of me and my goals throughout the entire recording and release of this album – the whole operation was really a labor of love and I’m anxiously anticipating everyone’s responses,” says Franks.  “I’m always in awe of the way truly good music can evoke a wide range of emotions and my ultimate goal was to create something with that effect - if even one or two people can relate to my music and are stoked on what they hear, I will feel 100% content.”

Stay tuned for Dustin’s webisode series and treat your listening palate to this post-punk American singer-songwriter on his Myspace page http://www.myspace.com/dfranksacoustic.    Also check in with Lightning Bolt’s website www.lightningbolt-usa.com for details on the upcoming album release party.  For interview or media requests, please contact Stephanie Weber at [email protected]