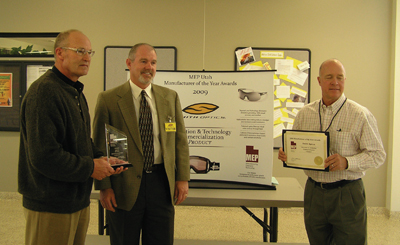 ³MFG was and continues to be a major component vital to the success and realization of our goals as global company with business in over six separate product categories.  This award truly belongs to the employees of MFG and we are extremely proud to have them as a part of our family,² said Smith president Ned Post.

The annual recognition encourages manufacturers to apply innovative, competitive, and cost effective principles to the management of their business.  Smith MFG, formerly DFG, has only been under the ownership and operation of Smith Optics since its purchase December 31, 2006, making this award that much more significant.  Moving from a decaying building to a new facility required extensive renovations, but also offered a chance to upgrade work conditions, process flow, and research and development capabilities.

Overhauling its manufacturing plant was a major undertaking which required rethinking many old practices.  The result was a host of new approaches to the manufacture and distribution of Smith product, which increased product flow rates, margins, worker safety, product quality, and order accuracy.
Additionally , significant investments in phone and computer systems, network servers, personal computer upgrades within the factory, lift trucks, and other equipment that was either upgraded, replaced, or supplemented has pushed MFG to the forefront of modern technology.

Smith also developed a series of new employee orientation clinics, training procedures, policies, and importantly introduced a series of improvements to employee benefits for all 250 employees.

Smith Manufacturing is deserving of a loud and hearty round of applause for the battle they wage in the trenches of the Smith business, which has become increasingly diverse, complicated and in need of  such thinking to enable its growth into the major force it is in multiple markets today.  The MEP award is just and due recognition for a group of 250 individuals who have become a team worthy of much praise and respect for all they do as a part of the greater Smith team.  Cheers!

"Everyone here is extremely proud of this award and see it as a confirmation of the product and process they have been a part of and are dedicated to," said Howard Peterson, Smith executive director and general manager of manufacturing and distribution.