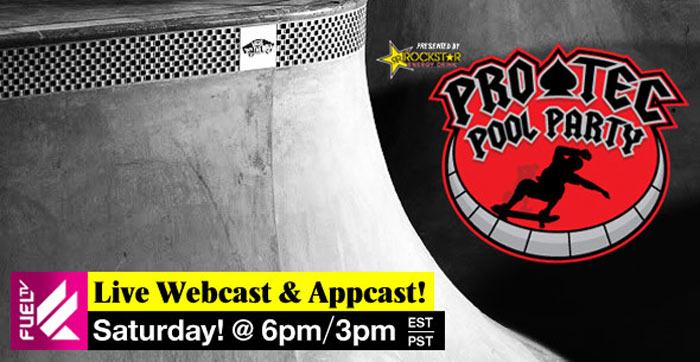 FUEL TV, the only network dedicated to the lifestyle of action sports, is partnering with Pro-tec for the most anticipated bowl contest of the year! Join us for the 6th Annual Pro-tec Pool Party Presented by Rockstar Energy Drink and see more than 40 top pros and masters vie for their piece of a $100,000 purse in one of the most unforgiving bowls ever built. Catch the exclusive live HD webcast of the event powered by FUEL TV at www.fuel.tv/poolparty/live, and for the first time ever, streaming live through the FUEL TV iPhone App. In addition to the webcast, FUEL TV will broadcast a one-hour recap show on Friday, August 6 at 8:00 PM ET/PT during the Skate @ 8 programming block.

Held in a newly renovated replica of the infamous Upland Combi at the Vans Skatepark in Orange, the 2010 Pool Party is going to turn out some of the best bowl action of the year. Starting Saturday, May 22 at 6:00pm ET/3:00pm PT and going until 1:00am ET/10:00pm PT, FUEL TV will webcast the contest in HD quality.

“FUEL TV is excited to bring back our live webcast of the Pro-tec Pool Party for the second year in a row,” says Gene Pao, Vice President of New Media and International Development for FUEL TV. “We’re proud to be a presenting sponsor of the Pro-tec Pool Party and to be able to provide live, online coverage of the 2010 event. To add to the excitement this year, for the first time ever we’ll also be offering live streaming through the FUEL TV iPhone App.”

“We’re excited to continue our partnership with FUEL TV, enhancing the experience for our fans and expanding our audience,” says Doug Palladini, Vans VP of Marketing. “We’re thrilled that skaters will be able to watch this webcast wherever they are, thanks to FUEL TV’s iPhone app. Whether they’re out skating or cruising with friends, they’ll be able to see all the action as it happens live from Vans Skatepark in Orange.”

Some of the standout pros in 2010 include defending champion Bucky Lasek and past champions Omar Hassan and Rune Glifberg. Other standouts include Bob Burnquist and Benji Galloway. The Masters contingency will include five-time masters champion Chris Miller, Steve Caballero, Nicky Guerrero, Lester Kasai, Christian Hosoi and Micke Alba.

FUEL TV also offers a selection of its full-length programming on its web site. Viewers can watch HD versions of hit shows such as “New Pollution,” “Bubba’s World” and “American Misfits,” among others.

For more information about the Pro-tec Pool Party, visit www.fuel.tv/poolparty. Make sure to check out the FUEL TV webcast of the Pro-tec Pool Party starting on Saturday, May 22 at 6:00pm ET/3:00pm PT to 1:00am ET/10:00pm PT at www.fuel.tv/poolparty/live. And watch for the one-hour recap show on FUEL TV Friday, August 6 at 8:00 PM ET/PT during the Skate @ 8 programming block.