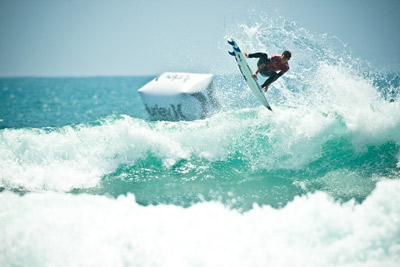 Building upon last year’s historic festival, the U.S. Open of Surfing is ramping up to a new level in 2010, infusing a youthful attitude, elite athletes, fashion and music—all against the backdrop of 50-plus years of competitive surfing at the famed Huntington Beach Pier.  The U.S. Open of Surfing presented by Hurley, Nike 6.0 and Converse hosts 500 world-class athletes and draws more than 500,000 spectators over nine days—July 31 to August 8.  The event is owned and produced by IMG, a global leader in sports and entertainment.  All of the action is accessible live on www.usopenofsurfing.com.

Converse and Nike 6.0 will bring top action sports athletes to Huntington by hosting elite BMX and Skateboarding competitions south of the famed pier.  The Nike 6.0 HB BMX Pro is a uniquely-formatted “park event,” featuring 25 invited riders.  Not to be outdone, the Converse Coastal Carnage returns with a Super Mini-Park event for skateboarding featuring one of the most creative wooden bowls ever designed as well as an impressive roster of 35 all-star skateboarders.

Open to the public free-of-charge, the U.S. Open of Surfing begins on Saturday, July 31 and runs through Sunday, August 8.  Live webcast and consumer information is available at www.usopenofsurfing.com.