I.S. Eyewear was the product of Canadian pro snowboarder Devun Walsh looking to create better eyewear for the evolving riding of freestyle snowboarders in the late ‘90s.  I.S. Eyewear Brand Manager Karl Fuhre joins the scene to talk about the company (past, present and future), the evolution of the product line, plans and incentives* for buyers at the upcoming KNOW?SHOW and ASR* trade shows, and the re-launch of the I.S. Eyewear skate team including skaters Paul Machnau, Russ Milligan, Chad Dixon, Paul Trep and a couple soon-to-be-announced big namers to join the team.  Big plans are in the works for the I.S. goggle and eyewear lines, so jump in and get your feet wet in this month’s Company Q&A; otherwise, the PartySnake will get yah – details below!

How did I.S. Eyewear get started?

I.S. Eyewear was founded in 1997 by Canadian snowboard icon Devun Walsh.  Back then there wasn’t really anyone making snowboard-specific goggles.  All that was available were “ski-racing” type frames with no peripheral vision and poor anti-fog systems.  Needless to say, they didn’t really work for the type of big mountain freestyle riding Dev was pioneering at the time.  Dev saw the need to create more stylish, better-suited eyewear specifically for snowboarders, and with the help of a tight group of friends he started I.S. Eyewear.

What pushed him to get the ball rolling?

When Dev met Jack Wang, who had access to factories and financial backing, the idea to build a better goggle for snowboarding quickly transformed from an idea conceived on a chairlift into reality.

Who else was involved during the initial stages of the company?

Jack Wang and Devun Walsh have been the driving force 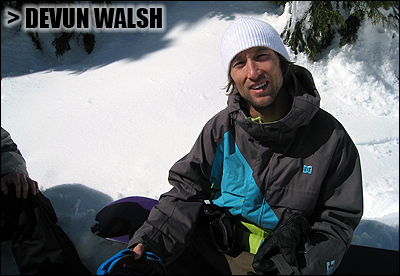 behind I.S. Eyewear since the beginning, but I.S. Eyewear wouldn’t be around today if it weren’t for all the support from the core snowboard community over the years.  When the company first launched, there were a lot of people who weren’t officially involved that helped with the initial success of the brand.  Thirteen plus years of team riders, photographers, designers, sales reps, friends, family and the list of people who’ve contributed to the brands progression adds up real quick.  There have been a lot of people who’ve come and gone over the years and we thank them all for helping us to be able to continue doing what we do today.

How did you guys launch the brand?

Once everything came together on the product side of things, the only thing left to do was let snowboarders around the world know there was finally an eyewear brand they could call their own.  Witnessing the success of “Shorty’s Young, Brown, Walsh,” a snowboard film in which Devun had not only just starred but actually helped produce, he knew there was no better way to spread his new brands message than by film.  In 1998, the idea to create the now classic snowboard movie “Lil’ Bastards” was born.  The “Partyboard” genre film featured top talent alongside upcoming riders and instantly turned I.S. Eyewear into a legitimate brand amongst the core snowboard scene.

You guys started out as strictly a goggle brand.  When did you add sunglasses to the program?

In 2000, I.S. Eyewear presented its first sunglass collection that consisted of a unique blend of casual yet sophisticated styles to the action sports industry, a period in time ruled by sporty wrap frames.  Being based in a multicultural city such as Vancouver helped set I.S. Eyewear apart from the beginning as a well-rounded fashion influenced lifestyle brand.  Talented Vancouver based designer, Kenta Goto, has helped maintain the clean aesthetic appeal of the product line and brand since the birth of the sunglass program.  Ten years of evolution and I.S. Eyewear’s sunglass line is looking better than ever: a wide variety of styles to suit everyone, fun cutting edge color ways, and competitive pricing all work together to make the current collection our strongest to date.  Look for collaborations with Mega Destroyers and Vivo headwear at the KNOW?SHOW and ASR trade shows this August.

I.S. Eyewear went through a couple name changes.  What went down?

Shortly after the launch of the sunglass program I.S. Eyewear, Iris Snow (the originally name) came upon trademark issues with a large corporation claiming the rights to the name Iris for eyewear.  Without the resources to embark on a lengthy legal battle, Iris Snow was forced to change its name to I.S. Eyewear: the “I” symbolizing Iris, and the “S” snow.  The name change seemed like a simple enough option, but with the golden years of snowboarding winding down along with the large marketing budgets of other companies in the industry, the transition between names proved to be a more difficult endeavor than first anticipated.  The strength of the icon portion of the logo helped bridge the gap between names for the brands following, and Iris Snow slowly transitioned to I.S. Eyewear.

I.S. has distribution partners across the globe.  How is growth coming on the international frontier?

I’ve recently taken over as international sales manager, which has definitely been a learning experience.  We’ve recently made some changes and brought on a couple new distributors and trying to partner up with the right people who share our vision.  We currently have a pretty solid foundation but we’re constantly working on expanding our reach.   Over the last two years we’ve been seeing growth with our sunglass program internationally, which is exciting. 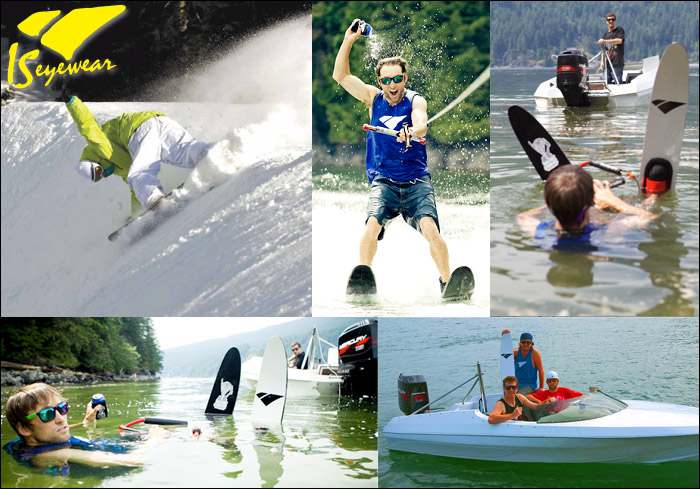 What’s the latest news with the snow and skate teams?

We’re in the middle of re-launching our skate program.  We just signed Paul Machnau, Russ Milligan, Chad Dixon and Paul Trep on the skate program.  We have a couple big names in the works, but I can’t say anything until we lock ‘em down.

On the snow side of things, we have Devun Walsh, Tadashi Fuse, Wille Yli-Luoma, and Dufficy & Kale Stephens.  On the AM program, our most recent additions include Chris Larson, Kevin Griffin and Adrew Brewer, plus we have a massive grass roots movement on the go, which will be showcased in the upcoming PartySnake video project titled “Video Grease.”   We’re stoked to have all the support from riders who want to be part of something they believe in.  You’re going to see a ton of I.S. logos in videos this fall.   Stay posted at www.iseyewear.com for team news and content. 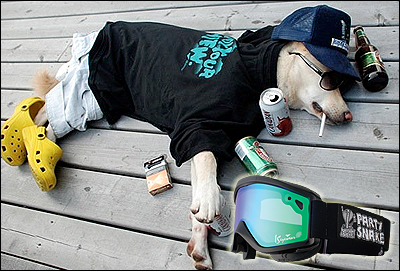 What plans do you have for PartySnake?

PartySnake has a million things on the go right now.  We’re just wrapping up the third PartySnake snowboard video, which I mentioned above is cleverly named “Video Grease.”  The video grass crew actually gave us their font so we could make sure it was a perfect bite.  We have a PartySnake skate video in the works. “PartySkate,” “Snakes on Skates,” or “Snake and Destroy” are some of the working titles we’re running with right now.  You can expect to see the premiere for that sometime next spring.

There’s also a PartySnake goggle with I.S. Eyewear available this fall which was actually one our highest booked goggle this year.  If you haven’t pre-booked it we will have limited stock available, but don’t sleep on it because they’re moving quick.  There’s an I.S Eyewear/ PartySnake sunglass in the works for spring 2011.  What else, a PartySnake/ Elm beanie, PartySnake/Ogio backpack, PartySnake/Coastal Skate deck, a PartySnake and Updown magazine tee, a Greasers/PartySnake tee, and a PartySnake/Airhole ninja mask.  I probably missed something but you can keep up with all the latest and greatest from PartySnake at www.thepartysnake.com.

What trade shows will I.S. Eyewear be attending this year?

I.S. Eyewear is the brainchild of Canadian pro snowboarder Devun Walsh looking to create better eyewear for the evolving riding of freestyle snowboarders in the late ‘90s.  I.S. Eyewear Brand Manager Karl Fuhre joins the scene talk about the company (past, present and future), the evolution of the product line, plans and incentives* for buyers at the upcoming KNOW?SHOW and ASR* trade shows, and the re-launch of the I.S. Eyewear skate team including skaters Paul Machnau, Russ Milligan, Chad Dixon, Paul Trep and a couple soon-to-be big namers to join the team.  Big plans are in the works for the I.S. goggle and eyewear lines, so jump in and get your feet wet in this month’s Company Q&A; otherwise, the PartySnake will get yah – details below!

What trade shows will I.S. Eyewear be attending this year?

You’ll be able to find I.S. Eyewear at the KnowShow in Vancouver August 11-13th, and ASR August 13–15th (Booth# 758 next to the street course/ASR ramp).  Swing by to take a look at the new line and our new aggressive pricing.

Nothing in the new sunglass line retails for over $100 USD, and the collection is full of bangers.  Hit me at [email protected] to set up an appointment to view the line.  We’re also looking for reps, so pop by with your resume.

You also happen to be the Godfather of the Office Booyz industry contest, which will take place Saturday, August 14, from 1-3 p.m., at ASR San Diego.  How did the original idea for Office Booyz come about?

A couple years back now, we had a solid crew of snow/skate industry desk jockies that would hit up Vancouver’s local mountains once a week after work for a night shred, followed up by some delicious wings and coldies.  We started joking around calling our selves “Office Booyz,” and next thing you know we we’re organizing our very own event.  Word quickly spread of this unconventional contest style called “OfficeBooyz,” and now 5 or so years later we have yearly skate and snow events in Vancouver and California.  If you work in the action sports industry and you’ve never experienced Office Booyz, I suggest you swing by our skate event at ASR.  Last year’s event was a blast, and this year we have $1,600 in cash to give away!

What incentives are on the line for buyers looking to book I.S. Eyewear for the upcoming season?

Well, not only will you get to meet the Godfather of Office Booyz, I.S. Eyewear will be offering a 10% discount on our already aggressive pricing to any shop who writes an order at the show!  Check out the latest collection online at www.iseyewear.com.

As for orders and/or appointments at KNOW?SHOW and ASR, feel free to give me a ring at [email protected]. 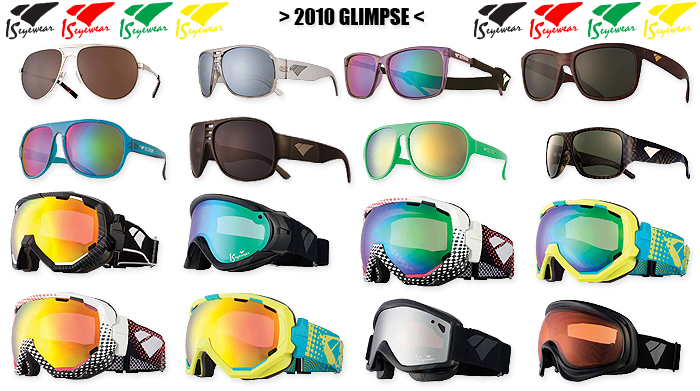