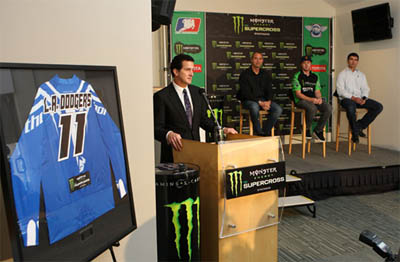 With plans underway for the inaugural Monster Energy AMA Supercross, an FIM World Championship, race at Dodger Stadium on January 22, Feld Motor Sports℠ presented the media with a preview of the conversion plans from a baseball field to a supercross facility.

Feld Motor Sports Senior Director of Operations Todd Jendro and Director of Supercross Dave Prater provided details of the historic undertaking of converting one of the most legendary stadiums in the country into a venue to host the world’s best supercross riders.

“Today marks a historic day not only for Monster Energy Supercross, but Dodger Stadium as well,” said Jendro. “This venue has a historic past and will now welcome 150 of the best riders on the planet. We feel that given the iconic image of Dodger Baseball and Dodger Stadium that it is the perfect fit to host an event of this caliber.”

Never before in the 48-year history of Dodger Stadium has an event of such a unique nature and logistic complexity been held at Chavez Ravine. Known for being the home of one of the most prominent Major League Baseball franchises of all time, 550 truckloads of dirt will sit on the Dodger Stadium floor for the first time ever, signifying a new era for the venue.

“We did the initial site visit a year ago,” added Prater. “When surveying a potential facility, we check out everything to see if it will work logistically ranging from the press box to the paddock. Dodger Stadium has one of the most valuable fields in the country and we are honored to be welcomed with open arms.”

Monster Energy Kawasaki’s Ryan Villopoto, who won seven AMA Supercross class races last season, was on hand to discuss his approach to racing in a new venue for the first time. Villopoto is coming off a season-ending injury suffered at the St. Louis round and will return to action for the first time during the 2011 Monster Energy AMA Supercross season.

“It’s always a different track no matter the stadium,” Villopoto said. “It really comes down to the dirt as some is really soft while others are really hard. If it is anything like the dirt we have at other rounds in California, it should be good. I’m really looking forward to the season coming up and I feel like I’m going to be more ready than I’ve ever been before.”

As a sign of their gratitude for allowing Monster Energy AMA Supercross to compete at Dodger Stadium, Feld Motor Sports presented Michael Young, Chief Revenue Officer of the Dodgers and known supercross fan, with a special customized Thor jersey.

“I’m very excited for this,” said Young. “I’m excited to expose this venue to millions of supercross fans across the world that have never had the opportunity to come to Dodger Stadium and hopefully convert them into baseball fans. This is an amazing sport and the growth of supercross is staggering, particularly in a time when many sports are shrinking.”

Additionally, Feld Motor Sports introduced Eric Hansen, Assistant Director of Turf and Grounds at Dodger Stadium, to the media. Hansen explained the complexity of laying dirt down on the field and what it means for what many consider to be the top playing surface in the country.

“I have all the confidence in the world in the Feld Motor Sports crew,” said Hansen. “All we have to worry about is replacing the actual grass once the dirt is removed and from what I’ve been told, (Feld) is the best in the world at what they do so my anxiety level is extremely low.”

For more information on the Monster Energy® AMA Supercross, an FIM World Championship, please log on to www.SupercrossOnline.com.