B$Z: Is the party really over?

How apropos that my first post as a new contributor here at Rad Collector comes on the heels of my first skateboard industry layoff. Ah well, perhaps it’s the start of a new beginning, or simply the beginning of the end. Either way it’s always good to make light of your personal sorrows. If you can’t laugh, you’ll always lose.

Cause let’s be real, the skateboard industry has seen better days. The mags are slim, companies are laying off workers, shops are closing doors, and marketing budgets are thinner than the last chalk line at a video premiere after party. The golden years of ten-mile-long expense reports, one dude per room hotel stays, ridiculous bar tabs,  company “team building” at strip clubs, trade show beer gardens, and globe trotting for “creative inspiration” are long gone and with them are the dreams of maintaining a profession where you can live and travel like a suit and tie executive without really having to do much of anything other than skate, party, and submit the occasional photo, blog post, T-shirt design, or article. The party was fun while it lasted, but just like most things that are too good to be true, the lights eventually had to come on. But just because the party’s dying down doesn’t mean we still can’t still enjoy ourselves. After all, we industry dudes still live the dream way more than the civilian set and if there’s two words that define us all it’s resilient and adaptable. 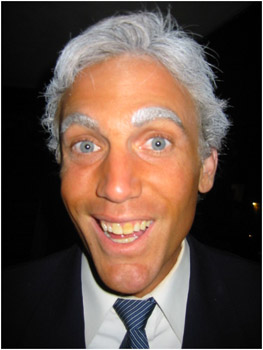 So in that spirit, I thought it would be  a great time to reach out to my good buddy Chad Mihalick who owns and operates action sports career site, www.malakye.com If there’s anyone who’s got a finger on the pulse of the skate industry job market it’s Chad. Here’s his take on whether or not we’ll be swiping our corporate cards with confidence in the near future?

Is the party really over?
Not if you’re still drunk. [laughs] The party is still going, but its smaller. It’s more of a house party now. People are spending a whole lot less money. It’s definitely not totally over cause there’s still strong brands and strong businesses out there. They’re just doing the best they can right now with what they’re able to sell. The strongest partiers always survive.

Who was the asshole that turned on the house lights?

Overall I’d say it’s mostly the recession combined with bad policy decisions made in the highest levels of government. People were living lifestyles that were way beyond what they could actually afford—buying things through credit, financing housing they couldn’t afford, and otherwise spending money that didn’t exist. All the businesses in our industries could do was react so they wouldn’t go bankrupt. It seems like based on what I’ve seen that sales were down 40 percent across the board in all industries.

In what is being called the worst job market since the great depression, do you have any specific advice for action sports industry workers looking for employment?

The number one suggestion for anyone is to go to your strengths. Whatever you’re strengths are, focus in on looking for opportunities where you can put your skill sets to work. Stay focused on that. In other words, don’t apply just to apply. Don’t apply for jobs where you don’t have strengths. Applying for jobs where you don’t have skill, experience, or interest wastes your time and the time of others.  If there’s nothing available in our industry, do what you can to get work. Your bills have to be paid somehow. Use every resource available and be creative.

You’re 22 years old, fresh out of college, and zero work experience….are you better off hanging yourself these days?

Get a job as a waiter and work for free during the day. You can’t let a bad economy stop you in the pursuit of a career. It might get hard and it might take a long time, but figure out what it is that you want to do and do your best to get it. Don’t give up. Get money where you can for now, but don’t forget your long term goals. When I started Malakye.com I didn’t make enough money to support myself for the first two years and I had to work at a restaurant to make ends meet.

What’s your latest take on the job market? Is it improving or are companies still slow to hire?

Things are definitely loosening up right now. Since rock bottom hit around Feb of 2009, two major upswings in hiring activity occurred through Malakye. There were two distinct increases of about 50 to 75 percent in job posting between now and then. In February of 09 there were about 70 job openings listed on ours site and now were hovering around 210 or so. It’s coming back, but the competition for these jobs is really high. For the people that do get hired, they end up working their asses off because what used to be a job for two or three people is now the job for one person. Employees are picking up the slack as they say.

Will we ever be able to write off bar tabs and lap dances again?

Oh for sure and it’s happening now – you forget last weekend already?! It’s just a brief intermission. It’s all part of the cycle. Don’t worry, the party will resume soon.