B$Z: Habitat Footwear takes a Foothold with the launch of its First Pro-Model Series

Fresh off the heels of their foray into the shoe industry, Habitat introduces their first-ever pro-model shoe line.  This summer the brand will introduce three different Guru Khalsa pro-model shoes: The Guru Low, Guru High and Guru Exolyte.  The line is rooted in the core principles that are synonymous with the brand; yet also represent Guru’s unique skating style and personality. 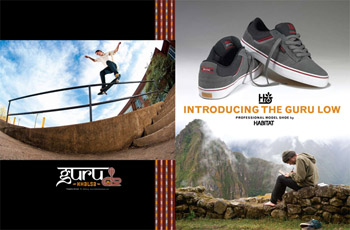 The Guru High, a totally original moccasin influenced shoe, can be worn as either a high top or folded down to mid height.  “Guru is not a cookie cutter type dude so we wanted to make sure one of the styles represented his originality and truly exemplified his personality,” explained Joe Castrucci.

A full-scale marketing campaign is accompanying the shoe launch this summer featuring print and digital ads along with video highlighting the athlete’s trip to the summit of Machu Picchu in Peru.  “To celebrate the release of Habitat Footwear's first pro-model shoe we asked Guru Khalsa to plan a trip to anywhere he desired. Always one for an adventure, Guru set his sights upon the ancient Incan wonder of Machu Picchu,” said Brennan Conroy, Habitat team manager. Additionally, the Guru High marked its skating debut in the town of Lima, Peru this past winter.  Check out the footage featured here on the You Tube video http://www.youtube.com/watch?v=fHnlQXYYQ40&feature=player_embedded#at=35

For more information on the launch of the Guru pro model series and other Habitat news, check out www.habitatfootwear.com