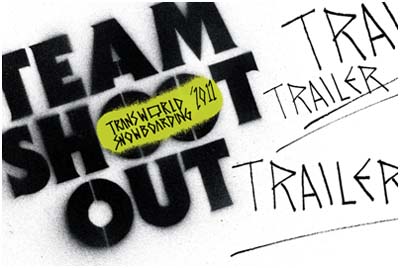 The 3rd Annual TransWorld SNOWboarding Team Shoot Out has officially rolled out! Four teams of five pro snowboarders each participated in this epic, weeklong creative media challenge; and for the third consecutive year, the photo and video capturing frenzy has everyone debating who will win the coveted prize—a spot on the cover of TransWorld SNOWboarding’s September 2011 Issue, set to drop in newsstands on August 2. Unlike any other snowboarding event in the world, the Team Shoot Out is an exclusive photo and video contest based on creativity and teamwork. This year the boundaries were dropped allowing the teams to hold their one-week shoot anywhere they chose.

Check out this year’s lineup:

On Wednesday, July 13, these teams were exclusively invited out to the TransWorld Media headquarters to view all the video and photo submissions of thee competing teams and find out the winning results. TWSnow.com has now officially begun to drop each crew’s full video footage online, and will continue to roll them out, one at a time, throughout the month, prior to the cover landing on August 2. Go online to the official Team Shoot Out page to check out all the videos as they are revealed. The winning video will be announced online on Monday, July 25 at 9 a.m. PST, so stay tuned!