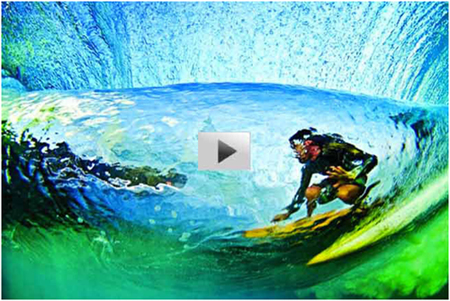 Chris Straley, has been awarded ‘Best Photographer’ for directing and photographing the “If a Reef had Eyes” campaign for the Transworld Surf Imaginarium project.   Reef was selected along with three other brands to produce a compelling photographic and cinematographic feature for Transworld Surf.  The only rules were to choose a theme that would be used throughout the story from start to finish, and no enhancing software could be used on the finished product.

Reef’s concept was photographed underwater at Teahupo’o with Rob Machado, Jay Thompson, and Sean Moody, and tells a story from the perspective of a reef.

Reef photographer, Chris Straley, stated, “Our concept isn’t 100 percent original, as underwater photography has been seen before, but we wanted an organic, raw feeling. We’ve seen so many rad below-the-surface photos that guys like Brian Bielmann have shot, and that gave us the idea for an underlying theme - to try and portray what a reef would have seen over the years since the creation of surfing.”

For more pictures and behind-the-scenes goodness check out
(http://surf.transworld.net/1000137822/photos/imaginarium-2011-team-reef’s-photo-submission/)