Therm-a-Rest, the Seattle-based industry leader in premium outdoor comfort, has been honored as a recipient of the 2011 Backpacker magazine Editors’ Choice Snow Award, the most prestigious award in the outdoor industry. The NeoAir All Season mattress received the award for its outstanding innovation in design, materials and performance. 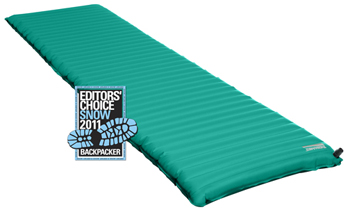 The Therm-a-Rest NeoAir All Season mattress is one of only nine winners chosen for the first-ever Editors’ Choice Snow Award from a field of hundreds. Using the same rigorous gear testing practices as the annual Editors’ Choice Awards announced in the spring, the Editors’ Choice Snow Awards ensure that the performance of the winners is truly worthy of distinction and meets the guiding principle behind the program: gear that is of real value to the readers of Backpacker magazine, who are very active, long-term outdoor enthusiasts.

“There’s no other magazine or website that conducts in-depth field-testing as vigorously or impartially as the crew led by Gear Editor Kristin Hostetter,” says Backpacker Editor-in-Chief Jon Dorn. “With a core team that has several centuries of combined trail time and expertise in every backcountry discipline, Kristin puts products through an unprecedented level of real-world abuse in every terrain and weather imaginable, including snow and ice. Because of that, extending the coveted Editors’ Choice Awards to account for the winter season allows us to lead consumers to even more products that show best-in-class performance.”

The NeoAir All Season mattress utilizes an effective combination of patent-pending multi-layer Reflective Barrier™ and Triangular Core Matrix™ technologies to dramatically boost warmth by minimizing thermal heat transfer. The multiple Reflective Barrier layers work together to reduce conductive heat loss to the ground, while radiating heat back to the user. The Triangular Core Matrix technology creates a matrix of hundreds of individual cells in the mattress, limiting convective heat loss and providing an internal truss system that eliminates the instability generally found on air mattresses. The result is a comfortable all-season mattress that one Backpacker tester called “the biggest upgrade in winter camping since down booties,” admitting, “I honestly might start sleeping on it at my house.”

“Receiving this award is an incredible honor,” said Doug Jacot, Vice-President of Therm-a-Rest. “Our goal is to provide the most comfortable night’s sleep so people can get the most out of their day and we’re proud to make a lightweight air mattress that accomplishes that in every season.”