Public response to the Whistler Sabbatical project has exceeded Tourism Whistler’s expectations – with thousands visiting the recently launched microsite and entering the contest for a month-long Whistler adventure.

Today marks week three of the Whistler Sabbatical Project<http://bit.ly/oxwqb7>: the ultimate Whistler contest with a grand prize of one month in the resort, expenses paid, a salary (up to $4,200), airfare, lift pass, equipment and a series of ultimate Whistler experiences.

“The Whistler Sabbatical Project is generating tremendous response,” said Tourism Whistler’s Senior Manager of Marketing Services, Kirsten Homeniuk. “There’s been great interest in the weekly online videos, and our social media efforts have resulted in thousands of people Tweeting the contest details and sharing with friends on Facebook. It’s really helping us to engage with more customers – and inspire people to choose Whistler this winter.” 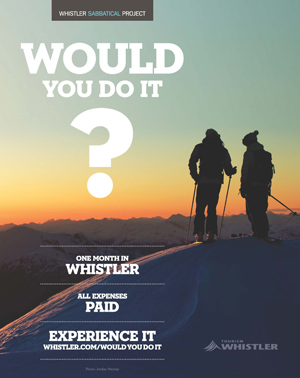 Its little wonder the response to the contest has been so positive, with unique options such as this week’s showcased experience: hours of luxurious pampering at the award-winning Scandinave Spa<http://www.scandinave.com/en/whistler/> in Whistler. Here the outdoor baths, steam room, sauna and treatment rooms – engulfed in a spruce and cedar forest with mountain vistas – provide guests the opportunity to unplug and connect with nature.

The Whistler Sabbatical Project launched October 17, with a new Whistler experience being featured each week for 15 weeks, and the opportunity to create the definitive ‘bucket list’ of Whistler experiences. Each week contestants are presented with an experience and asked the question: Would You Do It? Participants earn a contest entry each time they answer the weekly poll. Visitors to the microsite also get a glimpse of each experience through Tourism Whistler’s 45 second vignettes featuring the experience of the week. The videos highlight the experiences while showcasing the many activities that Whistler has to offer guests.

Contest entry for the Whistler Sabbatical Project is available at whistler.com/wouldyoudoit<http://bit.ly/oxwqb7>

The Whistler Sabbatical Project is generating a significant buzz with its use of online video, website interaction and social media. To date, thousands have entered the contest from across Canada, the United States, United Kingdom and Australia and people are regularly revisiting the microsite – which has received tens of thousands of visits.  Almost 40 per cent of the site visits are the direct result of Tourism Whistler’s advertising efforts. Just over a third of the visits are the result of email campaigns, with the remaining traffic being driven by social media and third party referrals.

GoWhistler Facebook fans have grown by 224 per cent – more than six times the average monthly growth. And interactions with GoWhistler on Facebook (including comments, shares, tags, and likes on a post) have increased by 123 per cent.

Visitor engagement on the microsite has also been very strong with above-average page visits and time spent on the site.  A major reason for the success in drawing repeat visitors to the microsite has been interest in watching the latest weekly video.  And responses to the weekly poll indicate that there are different opinions about what constitutes a dream experience in Whistler:

The microsite for the Whistler Sabbatical Project is featured on the whistler.com<http://www.whistler.com/> website – Whistler’s official information site and the call to action for the resort.

Whistler and Blackcomb mountains are scheduled to open November 24. Opening day is three weeks away and the alpine is already brushed with fresh snow. To view the alpine webcams visit whistler.com<http://whistler.com> or click here<http://www.whistler.com/webcam/>