“The Streets is taking the concept of what a snowpark should be to a whole new level,” says Nic Sauvé. “I envy the kids who will grow up riding it!” Pat Moore adds, “The park looks so sick. I’m excited for the snow to come to bring it to life! I think we’ll be seeing some real good snowboarders coming out of PA in the near future.” 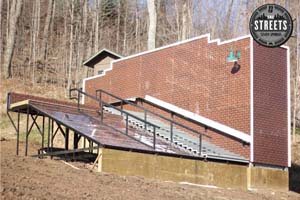 Urban snowboarding is supposed to be fun and accessible, but when you have angry security guards, passing cars or just can’t find the right features, your ability to actually enjoy it becomes limited. This is where The Streets comes in. The Streets offers a wide array of rails, ledges, gaps and wall rides, all built with the look and feel of riding in your local town.

“Being able to bring this level of urban features to a full access resort is something we used to only dream of,” says Forum Brand Manager Kevin Winkel. “The features that Pat and Nic have designed with Seven Springs and Snow Park Technologies will forever change how resorts look at building parks.”

Since 2004, Seven Springs has been committed to developing and growing its terrain parks. In addition to the already six parks and more than 70 features, The Streets is to be the most innovative urban setup created. “We are really excited to be partnering with Forum on The Streets,” said Joel Rerko, Seven Springs’ Director of Action Sports. “Seven Springs is committed to providing the best parks and pipes in the country, and this is a great addition to our already solid program. Our region is a perfect fit for this style of park and I know The Streets will help progress the riders of the lower East Coast.” Due to its hard work and dedication towards these efforts, Seven Springs has been nationally recognized as the 2011-2012 number one terrain park on the East Coast.

Assisting with the building and development of the features for The Streets is Snow Park Technologies (SPT). SPT is the world’s leading consulting team for special projects on snow and is comprised of an all-star crew whose passion and commitment give SPT its greatest strength. Their focus is on the design, construction, and progression of all areas related to terrain park development. This is a collection of the most experienced and talented freestyle park and pipe innovators in the world who are excited to see the outcome of working on the game-changing project, The Streets.

The Grand Opening of The Streets kicks off January 19th, 2012.

The Streets is found just off The Polar Bear Express Chairlift at Seven Springs Resort in Pennsylvania. For more information, stay tuned to www.thestreetspark.com. You may also visit www.forumsnowboards.com, www.Ride7springs.com, or www.snowparktech.com for more.

Click here to see more images as The Streets comes together.