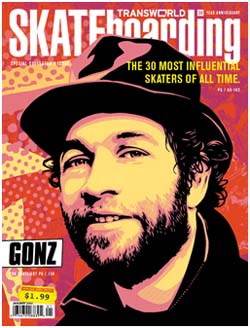 Last Thursday, TransWorld SKATEboarding opened its skate park in proper celebratory fashion, inviting the skateboarding industry’s elite, including top pro and legendary skaters, executives, brands and retailers to participate in one of the biggest nights in TransWorld SKATEboarding’s history. Since 1983, TransWorld SKATEboarding has stood for innovation, creativity and positive influence, founded on the statement, skate and create. As the brand unveiled the first issue of its 30th volume, the freshly printed pages proved that it still represents just that. With a cover shot of an immortalized Mark Gonzales (photo by Brian Gaberman, illustration by Shepard Fairey) and interviews from the 30 most influential skaters of all time, the TWS staff pulled off one of the most memorable and collectible issues yet.

The TransWorld Skate Park was transformed for the event, upgrading its look with fresh coats of paint, exclusive pieces on display from Lance Mountain, Jason Adams, and Ron Cameron, archived magazine issues, collectable skateboards, photo galleries by TransWorld’s Mike O’Meally and Skin Phillips, and TWS memorabilia collected over the past 30 years from TransWorld founder Larry Balma and his wife Louise, showcased in the adjoining photo studio. Group Publisher Liam Ferguson commented, “The vibe inside the skate park with industry icons, legendary pros, TransWorld founders, friends, family and alumni, was the perfect combination of what we wanted TransWorld SKATEboarding’s anniversary celebration to be. I am truly honored to be working with such a talented group of individuals.”

The photo exhibition, showcasing TransWorld SKATEboarding’s 30 most influential skaters of all time, will travel around the world throughout 2012. Daphne’s California Greek and Pabst Blue Ribbon, catered the 30th anniversary celebration, supplying the well over 300 attendees with plenty of good food and drinks.

In closing, TransWorld SKATEboarding Editor In Chief Skin Phillips remarked, “Seeing everyone there that night was truly overwhelming, the culmination of not only six months of hard work, but thirty years! Skateboarding legends Steve Caballero and Christian Hosoi were the last to leave, I guess that says it all.”