B$Z: Spyder Rep of The Year Gets an Audi for Effort 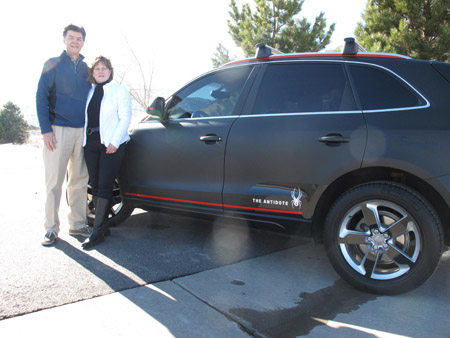 B$Z: Spyder Rep of The Year Gets an Audi for Effort

Long days on the road selling Spyder gear just got a whole lot more comfortable for Bill & Jane Ehmke. The husband and wife rep group were gifted a matte black 2011 Audi Q5 adorned with custom Spyder logo treatments as recipients of this year’s Rep of the Year award for the iconic brand.

The Rep of the Year is awarded annually to the individual or group who excels at customer service, brand promotion, direct consumer interaction, increases in sales per store, and increased store presence.

The dynamic selling duo have been representing Spyder since 1982.  “The Ehmkes are a class act – they are dedicated and hard working professionals who are widely respected in our industry. I consider it an honor to have them represent our brand for the past thirty years,” said Ellen Welley, Spyder’s North American sales director.