In a move that seems likely to shake up the surf industry, the Surfing Heritage Foundation has hired Bolton Colburn, the adventurous former director of Laguna Art Museum, as executive director.

Mr. Colburn, who left the Laguna museum in May 2011, will work with the Foundation's board and staff to lead the organization's development efforts, develop innovative programs crossing a range of disciplines, and raise the profile of the Surfing Heritage Foundation in the museum world. 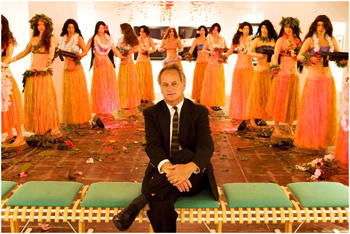 For months, rumors have been circulating that Mr. Colburn, 56, was being courted to join the Surfing Heritage Foundation, which has been likened to "the Smithsonian" of surf museums by ESPN. The mission of the non-profit institution, which opened in San Clemente in 2004, is to preserve, present, and promote surfing's heritage for the appreciation and education of current and future generations.  Housed in an 8,000 square foot building which is open to the public, the institution has a large collection of some 500 surfboards; 250,000 photographs; and an extensive archive including film, literature, clothing and other artifacts representing surfing culture. It is the largest and most significant collection of surfing at any cultural institution in the world.  Currently on view at the Foundation is Surfing Through Time, an educational program designed for community youth groups, schools, clubs, and camps that provides an overview of the history of surfing using primary objects from the collection.

Dick Metz, founder and board member of Surfing Heritage Foundation and the driving force behind the Hobie Sports retail chain, stated "Mr. Colburn's extensive museum experience as well as his background in surfing make him an ideal person to lead the Surfing Heritage Foundation in the next phase of its development." In the late 1970s, Mr. Colburn was a US Amateur Surfing Champion.

"The job that the board has sketched out for me is my dream job," said Mr. Colburn.

"In the last 10 years Surfing Heritage Foundation has done extraordinary things. I'm thrilled to be in a position to help the organization go the next thousand yards. Surfing Heritage Foundation clearly has the collection, support, board of trustees, and staff to become a major player, regionally, nationally, and internationally in the museum field."

In his tenure at Laguna Art Museum, Mr. Colburn championed scholarly exhibitions of historical and contemporary art that often looked at the crossover between popular culture and high art, such as the seminal Surf Culture: The Art History of Surfing (2002), which traveled to venues in Honolulu, Hawaii, New York, and Melboune, Australia.  Mr. Colburn was the founding director of the newly reformed Laguna Art Museum after its contentious merger with Newport Harbor Art Museum to become Orange County Museum of Art in 1996. When Mr. Colburn left Laguna Art Museum after fourteen years at the helm, the museum had a full-time staff of eleven employees, a budget of $1,300,000, a collection of over 3,000 works of art, and an exemplary exhibition program that regularly produced scholarly publications.  Prior to that, he was Senior Curator at the Orange County Museum of Art (1995-1996), Curator at Laguna Art Museum (1987-1995), and Registrar at La Jolla Museum of Contemporary Art (1981-1987)