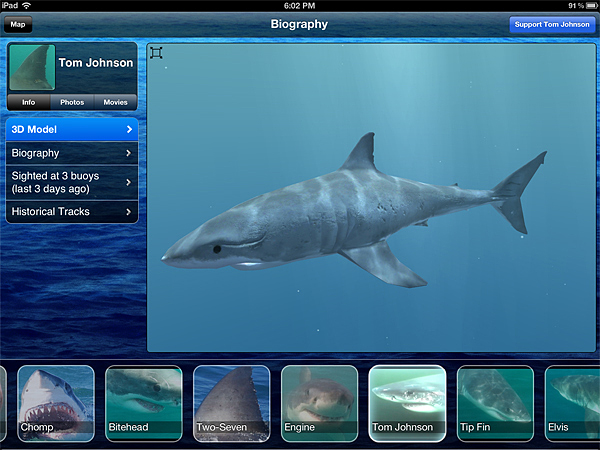 A 3-D model of Tom Johnson, one of the seven white sharks featured in the Shark Net app.

A few days ago, Stanford marine biologists were excited to detect a white shark swimming along the California coast north of San Francisco. Although the biologists routinely monitor sharks, this particular moment marked the first step toward a "wired ocean" full of mobile robotic receivers and moored listening stations that can detect ocean wildlife as it swims by.

Although similar technologies have been used to monitor the ocean itself, specifically to investigate climate change, this is the first such experiment dedicated to wildlife.

In addition to providing researchers with near real-time data of sharks and other animals, the project supports a new iPhone and iPad app designed to give the public a more visceral connection to the ocean and the creatures within. 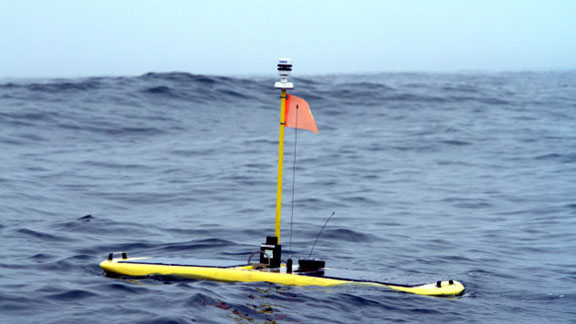 The Wave Glider robot – named Carey in honor of noted large pelagic fish biologist Frank Carey – is probing the Pacific Ocean off the California coast in an initiative led by Stanford marine sciences Professor Barbara Block and her research team to keep tabs on the comings and goings of top marine predators, and to provide better census data of all species in the area.

The Blue Serengeti Initiative, as the effort is called, picks up where the decade-long Tagging of Pacific Predators (TOPP) project left off. TOPP, an international collaboration among 75 scientists, involved tagging thousands of marine animals –great white sharks, elephant seals and leatherback turtles – and tracking their movements via satellite.

The seasonal gathering off North America's West Coast of animals as diverse as whites sharks, sea turtles, tuna, albatross and seals led Block and her colleagues to liken the California Current to Africa's Serengeti, a migration-heavy region long known to be critical to the sustainability of the animals that traverse it.

Part of the new effort relies on wiring up the regions Block and her team discovered during TOPP. This means getting listening stations in the water, and because the tags used in TOPP cost as much as $4,000, one of the first steps was choosing a less expensive technology for keeping track of the sharks long term. The team is now using $400 acoustic tags, each of which produces a unique series of "pings" to identify an individual animal as it swims by listening buoys.

There are now 120 white sharks carrying acoustic tags, along with 27 salmon sharks and five mako sharks. Other groups have tagged more animals – including salmon, sturgeon and lingcod – along the California coast with similar acoustic devices, which can also be picked up by the network of listening buoys.

Those buoys are moored in three foraging hot spots – Año Nuevo, the Farallon Islands and Tomales Point. These hot spots were known from ongoing photo ID studies by the team as well as the yearlong records from satellite tags that demonstrated the sharks' return with high fidelity. From now until late November, these three areas are plentiful with sea lions, seals and other prey that attract large numbers of white sharks. "These hot spots are like the Outback Steak Houses for white sharks," Block said.

The buoys can detect a shark's transmitter – or any animal with an acoustic tag – from as far away as 2,000 feet. The data is delivered in near real time to mobile devices; the whole process takes about four minutes.

Meanwhile, the unmanned wave glider Carey "surfs" up and down the coast, between the hot spots and to areas that are too remote for Block's group to visit on a regular basis. The device, built by the California-based company Liquid Robotics, consists of an underwater glider connected to a 7-foot-long "surfboard" that floats on the surface and carries scientific equipment. As the waves move the float up and down, it pulls the glider vertically. The glider's fins rotate to convert upward wave motion into forward thrust; as the float comes down off a wave, the glider sinks and the fins rotate in the opposite direction to generate forward thrust. This cyclical, nonstop action allows the glider to tow the float along a route set by the researchers.

Carey is decked out with sensory gear. The undersea glider carries the acoustic sensor, and solar panels on the floating board power a link to a satellite. It was launched near San Francisco last week, in anticipation of large numbers of sharks that will soon be arriving in the region. The first animal it heard was a rainbow trout, and it has since picked up a king salmon and several sharks.

This season's activities are really a test of a larger project. Block hopes to eventually deploy enough Wave Gliders and buoys to monitor the entire West Coast and create a "wired ocean" that will produce real-time data streams of the whereabouts of sharks and other marine animals, which will ultimately lead to long-term fisheries data that gauges the sea population in relationship to real-time oceanographic conditions.

Her ultimate goal is to get the data that will lead to better ocean management policies to protect animals that are critical to the health of ocean ecosystems.

"The California Current is like having Yellowstone in our backyard," Block said. "Our goal is to increase protection of this rich predator region; there are few places as wild as this this on Earth."

Sharks on your iPhone

The highlight of the new project is the acoustic detection data fed into an iPhone and iPad app. Shark Net, which is available free in the iTunes Store, allows users to follow the lives of about 20 white sharks.

According to Randall Kochevar, one of the Stanford developers of the app, people understand that the ocean and its wildlife are important, but unless one is experiencing the ecosystem every day, it's difficult to connect to issues on a personal level. Shark Net is an attempt to bring the ocean into living rooms.

With that goal in mind, in addition to providing updates on the sharks' whereabouts, the app includes features dealing with the perception that white sharks are just teeth and fins. "This app is an opportunity to show people that these animals have amazing behaviors," said Taylor Chapple, a postdoctoral researcher in Block's lab who has gotten to know the sharks well over the past seven years during his PhD thesis research, in which he developed the first census of the population.

For example, the rich biography of a large female dubbed Engine explains that she got her name because she was strongly attracted to the research vessel's engine. Photos and reports of a shark named Mr. Burns, identifiable by the large scar on his left side, go back to 2006. True-to-life 3-D models of each shark can be fully explored, and video embedded in the app allows users to appreciate individual behavioral differences. For example, Bitehead always turns left when confronting a decoy, whereas Chomp's name hints at the aggressive way he approaches decoys.

"They're very discerning. They'll swim around a decoy for a while, and might bump into it to get a closer look. They're not just an aggressive eating machine," Chapple said. "Let's not sugarcoat it," Chapple said. The white shark "has survived millions of years because it's a good predator. But there are many other facets to enjoy, not just jaws and teeth."

These are the intimate characteristics that make biologists fall in love with the creatures. "Sharks are being removed off the face of the planet and we're lucky to have a rich and diverse array of predators right off our Monterey shores. We hope the public will enjoy them as much as we do – from the comfort of their living room," Chapple said.

The Shark Net app and the technology driving it were funded in part by a Rolex Award for Enterprise given to Block earlier this year, with additional support coming from Discovery Communications, the Expo '90 Foundation's Cosmos Prize and Liquid Robotics.