B$Z: Toyota Signs on as Official Vehicle and Holeshot Sponsor for the 2012 Monster Energy Cup 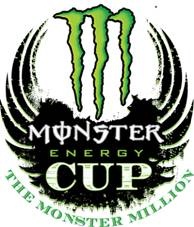 The 2012 Monster Energy Cup marks Toyota’s first year as the official vehicle and holeshot sponsor of this prestigious event that awarded Ryan Villopoto with the Monster Million after sweeping all three Main Events during its inaugural year. Toyota has also been the official vehicle sponsor of the Monster Energy Supercross, an FIM World Championship, for the past nine years. As part of Toyota’s commitment to the Monster Energy Cup, for the first time ever, they have created the Toyota holeshot trifecta award, which will award any rider who claims the holeshot in all three main events with a brand new Toyota Tundra.

“We’re looking forward to partnering with Monster Energy and Feld on The Monster Energy Cup and continuing our support of the sport. This event provides Toyota a great opportunity to do something a little different that adds even more excitement to the competition.” said Jim Baudino, Toyota’s engagement marketing manager.

Also, from September 20th through October 5th, Toyota will be hosting an online contest with Monster Energy Cup on Facebook, where four lucky fans will be flown to the Monster Energy Cup for the ultimate “Tailgate Trackside” experience. Winners will be awarded VIP track seating on a specially designed Toyota platform, airfare, hotel accommodations and spending cash as well as Monster Energy Cup merchandise.

The 2012 Monster Energy Cup features an all-new track design inspired by five-time Supercross Class Champion Ricky Carmichael. The Carmichael-inspired track design will consist of supercross and motocross obstacles unlike any other racetrack design in the world. More than 200’ of the track will be built into the grandstands, and the riders exit the stadium and race through the Monster Energy Fan Zone outside of the stadium and through the pit area before they catapult back into the stadium. The Monster Energy Cup posts a $250,000 purse with the winner walking away with a $100,000 check, and any rider that wins all three Main Events will take home $1 million.

Tickets for the 2012 Monster Energy Cup can be purchased at the Thomas & Mack Center Box Office, UNLVtickets outlets, online at www.UNLVtickets.com, www.MonsterEnergyCup.com,  or by phone at (702) 739-FANS. Tickets will be available at the Sam Boyd Stadium Box Office on the day of the event only.