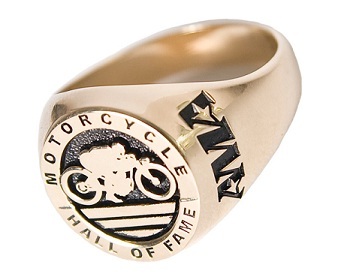 The prestigious Motorcycle Hall of Fame ring is a symbol of the significant contributions made by an inductee to the sport, business and lifestyle of motorcycling. The gold ring, which is created exclusively for the Hall of Fame, bears the institution's logo, the "Glory Days" design and the name of the inductee. The rings will be presented to the 2012 inductees and Hall of Fame Legends during the gala event at the Red Rock Casino, Resort & Spa on Friday, Nov. 16, in Las Vegas, Nev.

"It is refreshing to see Zero Motorcycles, a pioneering company that is taking electric motorcycle technology to new levels, honor motorcycling's storied history and pay tribute to pioneers of yesteryear," said Jeff Heininger, chairman of the American Motorcycle Heritage Foundation, which raises money for the Hall of Fame. "The Hall of Fame rings are an important piece of the induction ceremony and, for many inductees, the ring is an enduring symbol of their lifetime achievements. Zero Motorcycles' support is helping make all that possible."

Two existing members of the Hall of Fame will be honored as Hall of Fame Legends and will also receive rings: 1998 inductees Malcolm Smith, a pioneer in off-road motorcycling, and Mert Lawwill, the 1969 AMA Grand National Champion. Both Smith and Lawwill starred in the classic motorcycling documentary "On Any Sunday."

"On behalf of the entire staff of Zero Motorcycles, it is a proud honor indeed to support the Hall of Fame as official ring sponsor of the 2012 induction ceremony," Harden said. "The men and women selected reflect the highest level of achievement and accomplishment possible in our sport. I can't think of a better way for a company like Zero Motorcycles, one that is clearly focused on the future of motorcycling, to pay tribute to, and acknowledge, the legends who built this sport by sponsoring the ring ceremony."

The AMA Legends Weekend also includes one of the country's leading motorcycle shows and the finale of one of the most thrilling AMA-sanctioned national racing series. On Saturday, Nov. 17, the Red Rock will host the 2012 AMA Motorcycle Hall of Fame Dave Mungenast Memorial Concours d'Elegance, featuring many of the country's most impressive original and restored classic motorcycles. That evening, at the nearby Orleans Arena, fans can catch the last round of the 2012 GEICO AMA EnduroCross National Championship Series.

The AMA Legends Weekend will be held at the Las Vegas Red Rock Resort, a world-class spa, hotel and casino, featuring a range of entertainment, dining and family-friendly attractions. The facility's expansive ballrooms provide a stunning backdrop for the AMA Legends Weekend. Room reservations are available now at a special group rate by calling (866) 767-7773 and referencing group code RCIAME or AMERICAN MOTORCYCLIST. Online room reservations are available at www.redrocklasvegas.com.

For tickets to the final round of the GEICO AMA EnduroCross Championship Series at the Orleans Arena, see www.endurocross.com.