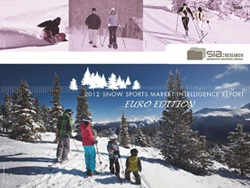 WASHINGTON, DC - SnowSports Industries America (SIA) is pleased to announce the release of the first annual 2012 Snow Sports Market Intelligence Report with Euro Currency Conversion. The report provides a detailed review of the 2011/2012 season, likely to be remembered as one of the most difficult on record for the snow sports industry. The Euro Currency Conversion allows for more convenient and comprehensive comparisons with the global snow sports marketplace and provides an easier to use version for suppliers who conduct business in the E.U. SIA converted all dollar amounts to Euros based on the exchange rate of €.8022 for every $1USD.

Celebrating its 35th annual update, the 2012 SIA Snow Sports Market Intelligence Report, with Euro Currency Conversion, provides valuable insight into retail sales, participation trends and demographics for snow sports participants as well as analysis of the season's weather and an overview of the economic health of the snow sports industry. The 2012 SIA Snow Sports Market Intelligence Report is available at no cost to SIA Members and at €381 to non-members.

Additionally, the report provides answers to questions such as:

Full reports on the women's and juniors-specific snow sports market will also be available in September and October. Stay tuned.
The 2012 Snow Sports Market Intelligence Report with Euro Currency Conversion is available at no cost for members. To receive a copy of the report or for more information about snow sports retail sales information and other SIA Research products including the Snow Sports Participation Study, Revisiting Growing the Snow Sports Industry, State of the Market, Model for Success, and more, contact Kelly Davis, SIA's Director of Research, at [email protected] or by phone at 703-506-4224.