Today's launch has been aborted at 11.42hrs MDT due to wind gusts making an attempt too risky. Felix has been removed from the capsule. wired.com/playbook has reported that the "Launch window likely to reopen Thursday".

If you're interested in watching the jump live, likely to happen this Thursday, there are a few options for viewing the jump. There will be a live feed courtesy of Red Bull being hosted on Wired’s Playbook. You can also follow the progress of the mission on the Red Bull Stratos Facebook page or keep up with the latest updates on twitter. 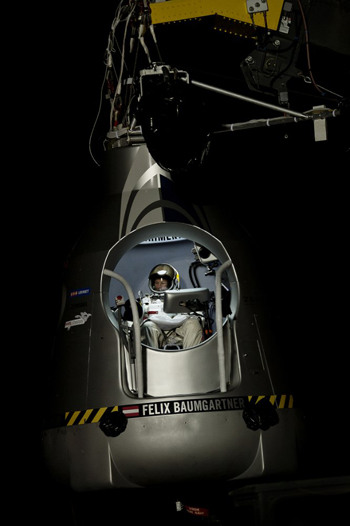 Red Bull Stratos Launch
Together with a team of aerospace experts, Austrian extreme athlete Felix Baumgartner is ready to rise to the challenge of the Mission Red Bull Stratos.

His aim is to jump from a balloon in the stratosphere from an altitude of 36,576 meters (120,000 feet) and perform a record-breaking freefall. Baumgartner wants to become the first person to break the speed of sound without the protection of an aircraft while simultaneously collecting data never obtained before for the advancement of medical science. After testing in an elaborate altitude (vacuum) chamber in Texas, the mission has moved on to a decisive phase at Roswell, New Mexico.

ROSWELL, New Mexico (United States) – The Red Bull Stratos team is making final preparations for their attempt to break Colonel Joe Kittinger’s 52-year-old record, a freefall from 31,333 meters (102,800 feet) during his historic “Excelsior III” project in 1960. Joe Kittinger has been involved as an advisor to the Red Bull Stratos project from the very beginning and serves as a mentor to the 41-year-old Austrian athlete.

Felix Baumgartner has already completed record-breaking B.A.S.E jumps in some of the world’s most spectacular locations, such as the World Financial Center T101 in Taipei, one of the world’s tallest buildings. He also did one of the lowest B.A.S.E. jumps ever when he leapt from the statue of Christ the Redeemer in Rio de Janeiro. In 2003 Baumgartner used carbon wings attached to his body to become the first man to skydive across the English Channel.

The leap from the edge of space will nevertheless be an entry into a new dimension even for Baumgartner. It is a step into the unknown. A team of leading technicians and scientists has spent the past five years developing the equipment and safety protocols necessary to assure the safe completion of the mission.

Red Bull Stratos will attempt to break four records at the same time that have remained unbroken for more than 50 years: the highest manned balloon flight 36,576 meters / 120,000 feet), the highest skydive, the first person to break the speed of sound during freefall, and the longest freefall (about 5 minutes 30 seconds).

The team will share all its findings and breakthroughs in the areas of aviation and aerospace with the science community around the world. Kittinger’s “Excelsior III” Mission proved to be instrumental in advancing research that led to improvements in safety for people in near space environments as well as improvements in the development of space suits. Mankind’s physical limits will be newly defined on this mission. The team aims to achieve advancements in medical science and contribute to the understanding of survival in space.

For Baumgartner this project is much more than merely attempting to break another record. “This mission is all about pioneer work. Maybe one day people will look back and say it was Felix Baumgartner and the Red Bull Stratos team that helped to develop the suit that they’re wearing in space. We want to do something for posterity.”

Red Bull Stratos medical director Dr. Jonathan Clark, who was the crew surgeon for six Space Shuttle flights, wants to explore the effects of acceleration to supersonic velocity on humans: “We’ll be setting new standards for aviation. Never before has anyone gone supersonic without being in an aircraft. Red Bull Stratos is testing new equipment and developing the procedures for inhabiting such high altitudes as well as enduring such extreme acceleration. The aim is to improve the safety for space professionals as well as potential space tourists.”

Art Thompson, an engineer who helped develop the B-2 Stealth bomber, is the Red Bull Stratos technical director. He conducted tests with the team at an altitude (vacuum) chamber at the Brooks City-Base in Texas. They were able to successfully simulate the flight profile of the capsule, life support and flight instrumentation systems to an altitude of 34,442 meters (113,000 feet). “The test in the chamber was a decisive moment for us. It’s as close as you can get to the near space conditions without leaving earth. We were able to verify our equipment and now we’re moving on to plan the first manned test flights,” said Thompson.

In the simulation test Baumgartner was exposed to the extremely hostile conditions found at that altitude. During the three-hour-long ascent, during which temperatures plunged to 70 degrees below zero Celsius, he was able to train on the complex steering of the capsule, his exit strategy and potential emergency situations. “This test was enormously important for our self-confidence. The success has given us an additional boost to rise to the challenges that still lie ahead,” Baumgartner said.

The mission will take place in Roswell because of the favorable conditions. The area is sparsely populated, it has some of the world’s best facilities for balloon launches such as this, and the weather allows several good windows for a successful launch.

BBC Documentary
An exclusive, all-access documentary about the Red Bull Stratos project is being produced by the BBC together with National Geographic. The feature-length film will premiere on the BBC in the UK and National Geographic Channel in the US following the jump. It will be aired across the rest of the world soon after. The 90-minute documentary about Red Bull Stratos is being globally licensed and distributed to broadcasters by BBC Worldwide.