McLean VA -- Today, SnowSports Industries America (SIA) and Leisure Trends Group have released for the first time, SIA RetailTRAK™ numbers for August through September 2012, collected from the Point of Sale systems of more than 1,200 snow sports retailers. Pre-season snow sports sales increased 2% in units and 1% in dollars sold to $307M this fall. A year ago many expected a second season of epic La Niña snow and record breaking sales and market momentum after the stellar 2010/2011 season was at an all-time high.
Unfortunately, the highly anticipated repeat of the 2010/2011 epic snow and record-breaking sales never materialized last season and the enthusiasm and positivity that were palpable in August and September died on the vine.

This time around, it isn't last season's momentum driving sales; it is pent up demand and a solid sense of optimism about snow that are impacting early season sales. Sales through September were at a 4 season high in both units and dollars sold with notably strong sales in the alpine equipment and accessories categories. 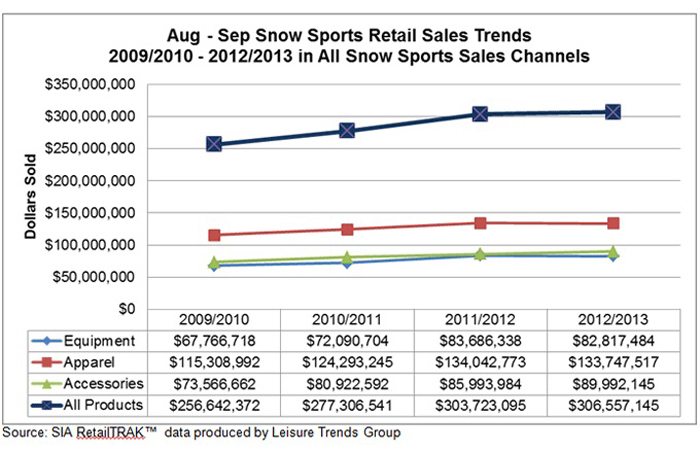 At the end of the 2011/2012 season, specialty inventories were up 14% in accessories and more than 30% in equipment and apparel. After the pre-season sales, inventories are still fatter with 11% more equipment and apparel units and 4% more accessories units, but much healthier than expected as resorts open and participants begin to make decisions based on early season conditions and forecasts. Lower than expected inventories indicate that consumers are exercising pent-up demand. In fact, our consumer research with the Snow Sports Insiders panel suggests that about ¾ of participants are expecting better snow conditions this season and are optimistic about the coming season. In general, participants are saying "it can't be worse than last season."  Consumers are not going wild but they are buying and looking forward to better snow this season.

Sales by Channel
Specialty shop sales fell slightly from $156M in the Aug - Sep period in 2011 to $150M in Aug - Sep 2012. Specialty dollar sales were down 3% in equipment, 2% in apparel and 7% in accessories. Keep in mind that shelves were stocked with in-season gear during the 2011 pre-season sales, in stark contrast to the high level of carryover gear available at deeply discounted prices for the current pre-season retail sales. In fact, carryover sales in specialty were up 34% this year compared to last helping clear swollen inventories.

Chain store sales remained flat at $72M even though equipment sales were down 19% in the pre-season. Chain stores have limited their equipment offerings and much of the decline in sales can be directly attributed to this choice rather than slack demand. Chain store apparel sales brought in $39M, down 4% compared to last season, while accessories sales increased 15% in dollars sold to $27M. Sunglasses, headwear, base layer and gloves sold exceptionally well in chain stores this fall.

Quick Pre-Season Trends:
• Alpine ski equipment sales are up 5% in units and 2% in dollars through September 2012.
• Snowboard equipment sales down 4% in units and down 6% in dollars sold to a 4 season low of just $26M in sales during August and September.
• Cross country equipment sales continue to suffer from last season's snow drought, down 9% in units sold and down 20% in dollars sold to $1.7M.
• Apparel sales make up more than 40% of all snow sports retail sales during August and September; apparel sales fell 2% in units and in dollars sold during the current pre-season sales period.
• Accessories sales increased 4% in units and 7% in dollars sold through September; helmets, luggage, gloves and base layer are selling well so far
The market data presented in this report comes from the Snow Sports RetailTRAK™ produced for SIA by Leisure Trends Group. Leisure Trends Group gathers RetailTRAK™ data directly from the Point of Sale systems of more than 1,200 snow sports retailers. For more information about snow sports retail sales, market data and other SIA Research products including the Snow Sports Market Intelligence Report, the SIA State of the Industry Videos, Snow Sports Participation Study and other exclusive industry reports, please contact Kelly Davis, SIA's Director of Research at [email protected].

SIA releases the top line results for snow sports retail seven times each season from November to May covering results of retail sales made between August 1 and March 31 each season. Topline/category retail sales data for the snow sports market is available as a member benefit to all SIA members. In addition, you gain free access to topline data for the Running, Outdoor and Paddle Sports when you register. The topline data is accessible on a 24/7/365 basis on Leisure Trends Cross-Industry RetailTRAK™ data portal. Non-SIA members may subscribe to the topline portal for just $375 per year. To sign up for topline data click HERE.