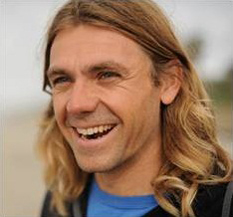 In the summer of 2011 after watching Marcel Dicke's TED Talk on the benefits of an insect diet, which concluded that eating bugs will lead to better nutrition with significantly lower environmental impacts, Pat Crowley became determined to slowly introduce Americans to the benefits of eating insects with approachable energy bars. Thus was born the Chapul Bar: the world's first cricket bar.

Chapul Bars are delicious, all natural energy bars with protein from Chapul's innovative cricket flour and are produced with techniques inspired by the Aztecs. Crickets are one of the planet’s most amazing, energy-efficient creatures and are rich in protein, calcium and iron, and very low in fats and cholesterols which make them the perfect source for energy bars.

Although producing energy bars with insect protein may seem unique, according to Chapul "80% of the world’s population regularly munches insects as part of a healthy diet." It seems the 'fear factor' approach from Americans to eating insects is purely psychological and something one must get over to utilize the "dramatically more efficient choice" of insects (like crickets) over more traditional protein sources (like beef).

"Being a water resource planner, I looked at it from a water savings perspective and it became very evident that we could save a tremendous amount of water in the West if we shift even a fraction of our protein intake from livestock to insects," explains Pat. "Starting Chapul is where I feel I can have the largest impact in advocating changes to our agricultural system, which is our largest consumer of water."

Read on for more on how Chapul, founded by college roommates Pat Crowley and Dan O'Neill, is working to making the world a better place by providing the means for a sustainable diet. 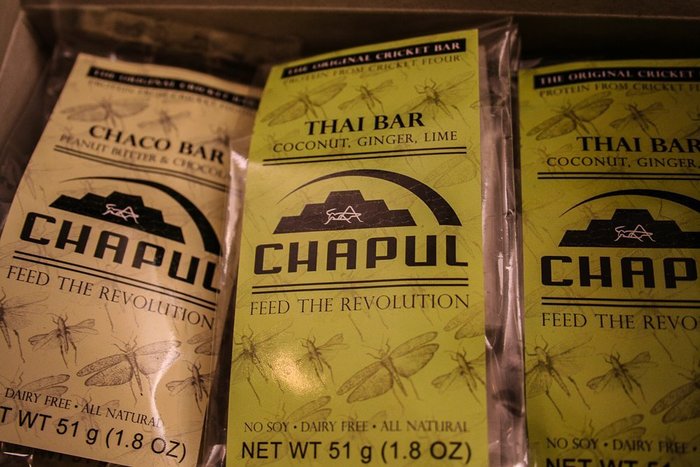 Congratulations on the success of the Chapul kickstarter campaign - how has the $16,000 in outside funding helped the company and what have you done since successfully funding your project?
Kickstarter is very appropriately named, as the funding that we received was just that, a kick-start for us, allowing us to purchase enough materials for our first couple of large-scale batches. We also moved into a commercial kitchen, where previously we were doing daily rentals. We also launched our website and are selling our bars online.

Where are you based and what’s a typical day in the office like there – a majority of time spent on R&D? Or, more into sales & marketing?
We’re based in Salt Lake City, UT. As we get going, there really isn’t a typical day so far, other than that it’s a long one. One day we will be making our cricket flour, the next we will be in our kitchen making and packaging the bars, then another day experimenting...We’re a small, self-funded company, so we all sport many different hats. As the snow starts falling here in the Wasatch this winter, everything gets put on hold for some fresh pow, of course.

How many stores currently stock Chapul bars and how are they selling? What are the plans for expanding distribution?
We’re currently in about 20 stores in Utah, Colorado, and California, but we’re talking with many more currently. We’re currently focusing our distribution to smaller, independently owned retail locations including food co-ops, bike shops, ski shops, etc. We plan to then ramp it up to larger retail chains at the beginning of 2013. We are also selling a lot of bars online from our website at www.chapul.com to the rest of the country as well as internationally.

What is your background, how have you prepared yourself to take on such an ambitious project?
My background is pretty diverse. I studied psychology in undergrad at Claremont McKenna College, most of the game we’re playing now at Chapul is all about a psychological understanding of what is food. I have also traveled extensively and have been exposed to many cultures around the globe that eat insects as a regular part of the diet, like it’s no big deal. On one of my trips (hitchhiking through Mexico and Central America) is where I developed my passion for water resources, and decided to dedicate my professional career to ensuring that future generations have a sustainable source of water. That has taken me to work for State and Federal water departments, environmental groups, educational institutions, river guiding, and now starting Chapul is where I feel I can have the largest impact, advocating changes to our agricultural system, which is our largest consumer of water.

When did you get the 'bug' to produce and sell energy bars using cricket flour?
In the summer of 2011, I listened to a TED Talk from a Dutch professor that explained the environmental and health benefits of eating insects. Being a water resource planner, I looked at it from a water savings perspective and it became very evident that we could save a tremendous amount of water in the West if we shift even a fraction of our protein intake from livestock to insects.

So basically, my motivation for starting Chapul was a passion for water.

Where do you get your crickets? Do they arrive already ground or is that part of the manufacturing process?
We’re working with a couple of farms in California that raise our crickets. We get the crickets sent to our facility where we do the entire process of creating the flour. 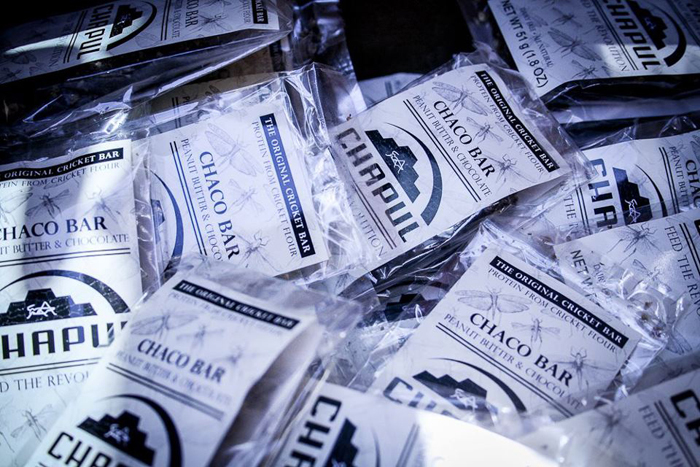 The Chaco Bar from Chapul: peanut butter, chocolate, and crickets.

What are the benefits of eating crickets as a main source of protein? Would it compare to eating red meat or fish?
From a human health perspective, crickets are a complete protein, and are low in fat with zero sugar. They also contain a lot of calcium and iron, which is something that vegetarians have a hard time consuming enough of without supplements. There is much less cholesterol and fat in insect protein than beef. It compares pretty well to some seafood; basically, shrimp and lobsters are just the insects of the sea.

How will you get potential customers to go beyond the psychology of eating bugs – you mentioned in other interviews the story of the California roll and the quick introduction of sushi/raw fish into the American diet – what similarities do you see with what Chapul is doing?
The California Roll was very strategically crafted to be a gentle introduction to sushi for Americans. They took the fish out and replaced it with avocado and turned the nori around so we didn’t have to see the foreign seaweed. We’re turning the crickets into flour for that same reason, to be a gentle introduction. We mix it with organic and all natural ingredients to create a delicious tasting energy bar which we thought would be a good vehicle for the intro.

Have you received any negative feedback on the bars, either from customers unwilling to eat insects or possibly from animal rights groups?
I don’t think we would be doing a good enough job of getting our message out there if we weren’t getting some negative feedback. There will always be people who are afraid of change, politically, socially, and certainly in their cultural food preferences. Our European ancestors brought with them a very different form of agriculture and food preferences to this country than was being practiced by the Native Americans.  In turn, insect eating in North America died out for the most part. However, as we increase the pressure upon our natural resources in a changing environment, that sort of mono-culture agriculture won’t fly. More and more, we’re recognizing that our health depends on the diversity of the ecosystem around us, as well as the diversity of our own food supply.

Whether people are willing to try new things or not certainly won’t prevent the fact that changes are in store for all of us, perhaps in a big way. 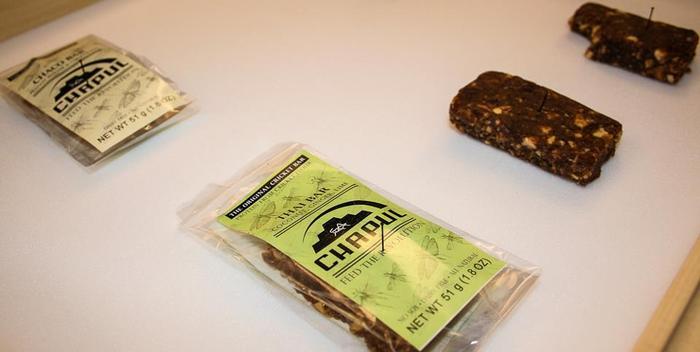 Can you touch on possible future plans or product ideas, in general terms – do you see Chapul offering whole bugs ever, or is including the insects in a ground form a staple of the company?
The flour is intended to be a gentle introduction for Americans to the idea of eating insects. We have a lot of fun in our kitchen experimenting with different ways to present insects in a healthy and delicious way. Whole bugs are certainly not out of the question. We plan to continue our innovation in food products, in line with, or perhaps just slightly ahead of, what people are ready for.

Can you recall your first experience eating bugs?
Yeah, I ate some ants at Boy Scout camp when I was a kid – they tasted like lemon. I also ate chapulines in Oaxaca, Mexico.  After I initially became excited about the idea to eat insects as a staple, but before I had started Chapul, I was leading a river trip for National Outdoor Leadership School and one of my students caught a grasshopper and was daring people to eat it. I was like, “I’ll do it!” I explained my motivation, and by the end of the trip, I would say half of the 20 students had tried at least one grasshopper.

Is there anything we missed that you'd like to add?
In addition to trying to create change in our food systems, this project is meant to be an inspiration for many more large-scale and paradigm-shifting changes that we need to make as a culture, and as a civilization if we want to be able to leave future generations with a truly sustainable way of life. 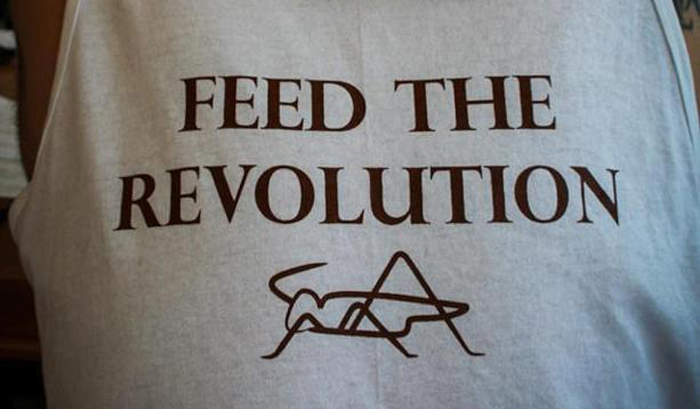 The shirt back says it all: "Feed the Revolution"