The snow sports market declined 2%, but reached $616M in sales so far this season (August through October) despite significant disruptions in retail sales in the South and Northeast regions due to Hurricane Sandy, uncertainty in the face of the “fiscal cliff,” and lack of momentum from the snow-challenged 2011/2012 season. Over the past four seasons, retail sales from August 1 to October 31 account for approximately 15% of total season sales and tend to be indicative of momentum from the previous season; snow sports retail sales during August through October 2012 follow that pattern. 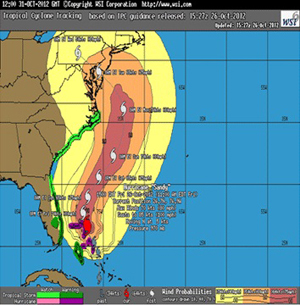 In late October, Hurricane Sandy disrupted lives and retail sales with blizzard conditions, severe flooding and wind damage to much of the Eastern Seaboard. In the South and Northeast regions retail was literally shut down for days. Sandy had a direct impact on the residences of a third of skiers and riders in the U.S. market. In fact, snow sports specialty retailers in the Northeast suffered a $14M (26%) decline in October dollar sales and the South saw snow sports sales slip $6M (27%). Equipment dollar sales were particularly depressed in these two storm-struck regions, down 30% in the Northeast and down 44% in the South. It’s logical to conclude that few persons affected directly by this mega-storm were thinking about buying new snow sports equipment as they recovered from this wide ranging severe weather event.

Traditionally, Presidential elections have a slight positive impact on retail sales, but there are more variables associated with the current political environment, most noteworthy is the wide-spread fear of falling off of the “fiscal cliff” in January. Usually retail sales experience a short surge after an election as uncertainty about the future of social and economic issues is diminished. Unfortunately this Election Day did little to allay feelings of uncertainty as attention immediately turned to the impending “fiscal cliff” that could have severe economic impacts across the U.S. economy. Uncertainty and the resulting fear tend to depress retail sales, particularly in discretionary spending, and may impact the snow sports retail market until the “fiscal cliff” issues are resolved one way or another. If congress fails to come to an agreement on a new national budget we expect to see sharp declines in consumer confidence and consequently, in snow sports retail sales.

SIA and Leisure Trends Group are proud to announce that the previous August to October period is now broken into the previously released August - September release and this stand-alone October only data set. This is the second of seven deliveries you will receive this season. Understanding that past trends help forecast upcoming sales, Leisure Trends retrofitted into comparable time periods from the 2009/2010 season to the present report.