Modern Assemly, A New Alliance of Apparel Shows, To Debut in Las Vegas
Tradeshow Groups to Collaborate at the Venetian for August 2013 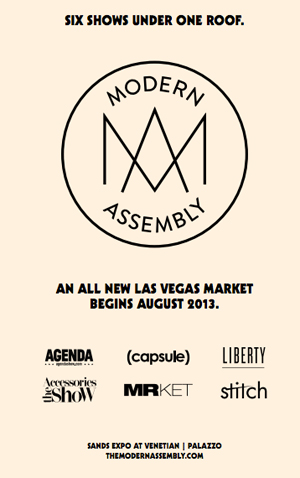 NEW YORK, NY: Modern Assembly, a new strategic alliance made up of the AccessoriesTheShow, Agenda, Capsule, Liberty, MRket and Stitch tradeshows, has announced a unified presence to debut in Las Vegas for August 2013. The shows will present A/W 2013 collections from more than 2500 brands at the Venetian and Sands Expo in a newly developed, streamlined format for one of North America’s largest fashion market weeks.

In a move that dispels the myths and competitive nature between the fashion tradeshows of yesteryear, the shows that comprise Modern Assembly will provide an ideal mix of resources in the right environments, with the utmost of convenience by co-locating and cross-marketing. Starting this February, Modern Assembly will present a strategic, unified and global approach to promoting Las Vegas as a major fashion destination, to elevate the experience for all participants. Modern Assembly will enrich the Las Vegas market by enabling retailers to shop authentic shows that have real roots and meaningful solutions for a complete array of industry segments and will offer buyers an unparalleled experience that values and promotes a vast range of selection, fine-tuned merchandising and a high-level of customer service.

For the August 2013 launch of Modern Assembly, Agenda, the Los Angeles, California-based show centered on action sports and streetwear will make its Las Vegas premiere. Liberty, a new show concept by industry veteran and original Project Show founder Sam Ben-Avraham, will debut with a selection of 250 premium men’s and women’s labels. Those two shows will join Capsule, AccessoriesTheShow, MRket and Stitch, which already call the Venetian Resort and Sands Convention Center home. AccessoriesTheShow (women’s accessories), MRket (classic to contemporary menswear) and Stitch (better to contemporary women’s RTW) are part of the BJI Fashion Group, which in 2005 launched events in Las Vegas to exclusively serve the better market. Capsule, the high-end, directional contemporary show featuring a tightly edited selection of men’s and women’s labels will kick off its sixth Las Vegas edition.

“We want to make Las Vegas really sing again,” says Ben-Avraham. “Working together is a new way of doing business. Each of our four organizations are committed to servicing the industry as best we can. We want to provide the ultimate platform for brands.”

“Where there is cooperation and good will, Capsule is proud to be there,” says Minya Quirk, co-founder of Capsule. “We believe in strength in numbers and look forward to this exciting new union in Las Vegas alongside people and organizations we have long respected and admired. ”

“The BJI Fashion Group is thrilled and honored to be a part of this new alliance,” says Britton Jones, President and CEO of Business Journals Inc. “For far too long, the fashion markets in Las Vegas have not lived up to their real potential because they have been so splintered. Buyers have spent too much time rushing to try to reach all of the resources they want to shop and exhibitors have been frustrated by buyers being so pressed for time. Now buyers can shop the best of each season without leaving the Venetian.”

“The Agenda Show thrives on deeply established exhibitor and retailer relationships in the streetwear, lifestyle, and action sports industries and we couldn’t be happier to be a part of this new union of shows,” says Aaron Levant, founder of Agenda. “Modern Assembly will solve the increasing feelings of discontent surrounding the Las Vegas market, by offering a familiar and trusted trade show environment which houses four remarkable shows under one roof.”

Modern Assembly
Modern Assembly, the alliance between the Agenda, AccessoriesTheShow, Capsule, Liberty, MRket and Stitch apparel and accessory shows in Las Vegas, seeks to offer an unparalleled experience that values and promotes
brand selection, merchandising, a high-level of customer service and a pooling of resources for better business. An unprecedented, forward-thinking approach built on old-fashioned values, Modern Assembly was conceived
to benefit the industry at large. Cooperation, at the heart of the alliance, will allow for an improved forum for more than 2500 of the world’s most exciting men’s, women’s clothing and accessory brands to meet with North
America’s largest audience of fashion retailers.