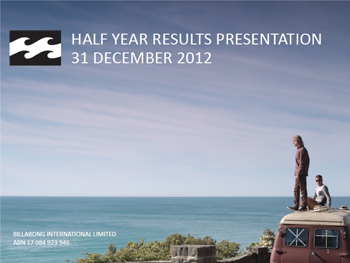 GOLD COAST, 22 February 2013: Billabong International Limited (“Billabong” or the“Group”) today announces its half year financial results to 31 December 2012 and provides an update on the progress of its Transformation Strategy.

Overview
- Net Loss after Tax for half-year to 31 December 2012 of $536.6 million
- $567.0 million of significant items ($534.4 million is non-cash)
- Excluding significant items, Group EBITDA up 12.9% (in constant currency terms on the prior corresponding period (pcp)) to $57.2 million (45% up in the Americas, 29% up in Australasia and 78% down in Europe)
- Transformation Strategy significantly reducing costs across the business
- Previously announced due diligence by bidding consortia expected to conclude next month

Reported Earnings
Billabong incurred a Net Loss after Tax for the half-year of $536.6 million. The result was impacted by $567.0 million of significant items, including $427.8 million non-cash impairment for goodwill and brands, and $106.6 million relating to a non-cash writedown of its investment in Nixon.

Adjusted Earnings
Excluding significant items and the prior year Nixon results, global sales revenue of $699.6 million was down 8.1% on the pcp. Adjusted Earnings Before Interest, Tax, Depreciation and Amortisation (EBITDA) was $57.2 million for the Group, an increaseof 9.9% (12.9% in constant currency terms) compared to the pcp. The Adjusted Group EBITDA improvement was driven by the cost reduction and store closure programs previously announced. 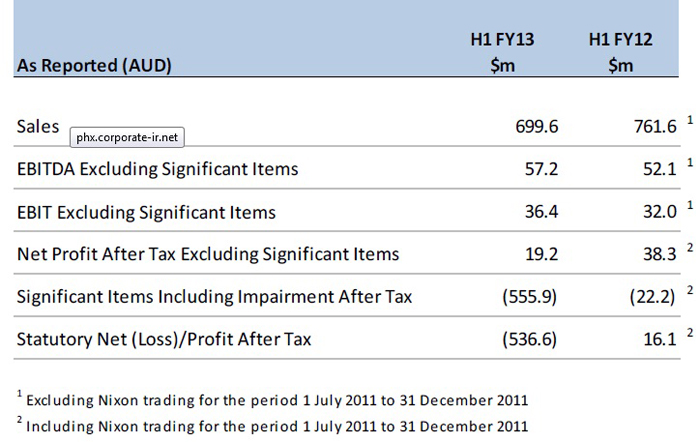 CEO Launa Inman said, “We have continued to address issues of the past and are seeing some positive signs emerging in several markets and witnessing early benefits of the transformation strategy. These results emphasise that significant structural change is essential to return the Group to profitable growth.

Our focus remains on simplification of the business, reducing costs and continuing to build a culture of transparency and accountability providing a platform for futuregrowth for our brands.”

In constant currency terms sales fell 5.3% in the Americas, driven largely by poorretail conditions in Canada and store closures. Heavy competitor discounting occurred in the US throughout December. In Australasia sales dropped 1.6%.Despite interest rate cuts, the bricks and mortar retail environment remains challenging; however, there is continued strong growth online.

Bid Update
Management presentations and site visits continue with the Sycamore and Altamont /VF consortia as part of the previously announced due diligence process, which is expected to conclude next month.

Transformation Strategy
Billabong announced a four year Transformation Strategy in August 2012 with the keydevelopments for the first six months being,
- Store closure programme on track with 119 retail outlets closed to date, targeting a total of approximately 160 stores to be closed by June 2013
- Apparel supplier numbers to be reduced from over 275 to 50 commencing March 2013 as part of a major restructure of the global supply chain
- Management restructure and a staged move from regional to global reporting lines
- Global IT head appointed and strategy in place with new reporting and operational systems rolling out from mid-2013
- Billabong girls and women’s wear global strategy advanced

“Our management team, including those who have taken on new responsibilities in recent months, are having a positive impact in addressing the well-publicised challenges faced by the Group”, said Ms Inman. “However, given the lead times, the benefits from reduction in supplier numbers and brand improvement strategies will not be seen in this financial year.”

Impairment
As foreshadowed in the Group’s December statement to the market, the Group has written down the value of brands, equity accounted associates and goodwill. These write downs of $534.4 million after tax are of a non-cash nature and are reflected as significant items in the financial statements. Following this impairment the carrying value of the Group’s intangible assets is $351.6 million.

The major components of the impairment charge relate to the Billabong Brand, North American goodwill and the Group’s 48.5% share of Nixon.

Balance Sheet
As at the end of December 2012, net debt was $152.2 million, down $8.7 million from June 2012. As a result of the announced impairment charges, the Group would not have been in compliance with its consolidated shareholders’ funds covenant with respect to its major banking facilities as at 31 December 2012.

The Group’s financiers have agreed to amend this covenant with effect from 31 December 2012 and thereafter. The Group is in compliance with the amended covenant; however, as this was not in place at 31 December 2012, the Group has classified $269.8 million of borrowings as current liabilities on the balance sheet, notwithstanding that they are not due to be repaid within twelve months.

In addition, the Company has agreed to move, as soon as practicable, to a secured banking arrangement with its major financiers whereby the Company will grant security over the majority of the Group’s assets.

As at 31 December 2012 deferred consideration obligations amounted to $55.4 million of which $11.2 million is due within twelve months.

Dividends
There will be no dividend paid in respect to the 2013 financial year. 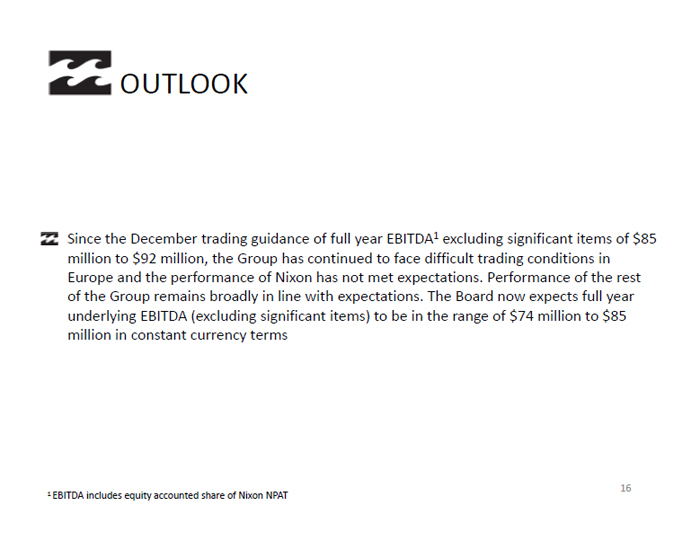