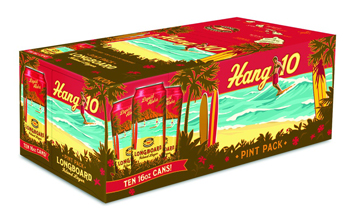 The name takes it cues from a classic longboard surfing stance in which a surfer inches or cross-steps his or her way to the board’s nose while the surfboard is propelled by the wave with all ten toes hanging off the edge.

“The name suits our Longboard Island Lager perfectly, and this pint pack gives craft drinkers another occasion to enjoy our Liquid Aloha,” said Kona Brewing company president Mattson Davis. “The 10-pack occasion is great for small gatherings because you can quickly grab it and head to the beach or barbecue knowing you’ve got enough brews to share. Plus each can is a full pint, which means more Longboard per can and more time to talk story with friends and family, like we do in Hawaii.”

About Kona Brewing
Kona Brewing Company was started in the spring of 1994 by father and son team Cameron Healy and Spoon Khalsa, who had a dream to create fresh, local island brews made with spirit, passion and quality. It is a Hawaii-born and Hawaii-based craft brewery that prides itself on brewing the freshest beer of exceptional quality, closest to market. This helps to minimize its carbon footprint by reducing shipping of raw materials, finished beer and wasteful packaging materials. The brewery is headquartered where it began, in Kailua-Kona on Hawaii’s Big Island. For more information call 808-334-BREW or www.KonaBrewingCo.com.