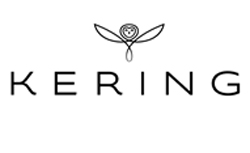 The company behind Gucci and Yves Saint Laurent has been selling off its retail operations in recent years to focus more on its luxury brands. PPR stood for Pinault-Printemps-Redoute, but the Printemps department store and Redoute retailer have since been sold off.

Only the Pinault — the name of the company's founder and his son, the current CEO — still had a connection to the company.

The company said the new name reflects its roots in Brittany and its hopes for the future. It said it should be pronounced "caring" and noted that "ker" means home in Breton.

The name is pronounced "caring" in English.

Following a complete transformation, the Group is changing its name to reflect its new identity.

The Group’s change of name will be subject to the approval of the annual general meeting to be held on 18 June 2013.

Since 2005, PPR has undertaken a radical transformation. In a few months’ time, the new Group will have left the distribution sector completely. From a conglomerate focused on primarily European distribution activities, in the space of a few years, PPR has become a cohesive, integrated and international group.

It is now focused on a single business: apparel and accessories, across two fast growing segments: Luxury and Sport & Lifestyle brands.

“Changing our identity is the logical and necessary outcome of the Group’s transformation. More than just the change in scope or activity that this new name reflects, it expresses the Group’s new identity and our corporate culture”, said Chairman and CEO, François-Henri Pinault.

The Expression of the Group’s New Identity and Culture

First and foremost, Kering can be pronounced as ‘caring’ in English, which expresses our company culture of taking care of our brands, people, stakeholders and the environment. The suffix ‘-ing’ expresses the idea of movement, one of the constants in the Group’s history, as well as its international dimension. The stem ‘ker’, meaning home in Breton, is a proud reminder of our origins in the Brittany region of France.

Our new emblem, the owl, represents vision, as well as being a sign of wisdom. A discreet and protective animal, it is a powerful symbol for a Group that spots potential and guides and nurtures its brands and people.

Lastly, our new signature, ‘Empowering Imagination’, places imagination at the heart of our business, enabling us to create value in the widest sense. At Kering, we encourage and take care of imagination to push our brands and teams to new limits, to create, innovate and realise their artistic and financial potential – in the most sustainable manner.

“Kering is a name with meaning, a name that expresses both our purpose and our corporate vision. Strengthened by this new identity, we shall continue to serve our brands to liberate their potential for growth”, added François-Henri Pinault.

Louise Beveridge, senior vice president of corporate communications at Kering explains: “We wanted a communications plan that would be both global, reflecting the new character of the Group, and digital, consistent with its strategy”.

• Internal acceptance by staff
François-Henri Pinault unveiled the new identity yesterday to the Group’s directors and head-office staff. A live webcast ensured that most employees of Kering and its brands across the world could be involved.

• World advertising campaign
Broadcast in North America, Europe and Asia from the end of March, the campaign aims at highlighting imagination – the driving force of the Group and its brands – through a film broadcast on the Internet and informing about the name change through press and online advertisements. It will be supported by a press and public relations plan rolled out internationally.

• Digital story-telling
The advertising campaign will mainly be broadcast on social media (Facebook, Twitter, LinkedIn, Vimeo, Sina Weibo and Youku). The change of name is also an opportunity to implement a digital story-telling strategy with original content. Kering is today launching a completely new type of collaboration with the fashion blogger, Garance Doré. For several months, from 2 April, she will present videos, translated into five languages, that will portray the Group’s distinctive way of nourishing the imagination of its brands.