The lone international stop of Monster Energy AMA Supercross, an FIM World Championship, signified the 12th race of the 2013 season as 48,669 Canadian fans converged inside Toronto’s Rogers Centre on Saturday night. For the seventh time this season, Monster Energy Kawasaki’s Ryan Villopoto took the checkered flag, increasing his lead in the 450SX Class Championship while also extending his current winning streak to four races. In the 250SX Class, Red Bull KTM’s Marvin Musquin captured his third consecutive win in the Eastern Regional Championship, gaining ground in the standings with a wire-to-wire effort.

The 450SX Class Main Event was one of the most captivating of the season as Villopoto claimed the Nuclear Cowboyz® Holeshot Award, but lost the lead shortly thereafter to TwoTwo Motorsports Honda’s Chad Reed. Rockstar Energy Racing’s Davi Millsaps followed Reed by Villopoto as well into second, setting the stage for a thrilling battle that also included Red Bull KTM’s Ryan Dungey and Team Yoshimura Suzuki’s James Stewart. 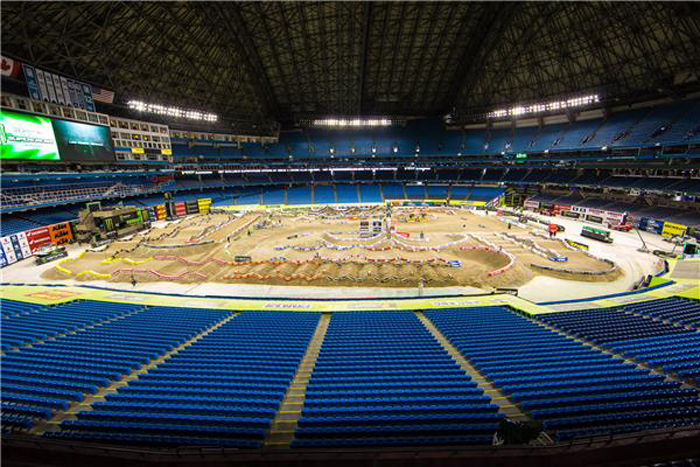 Millsaps was able to slip past Reed for the lead on the second lap of the race and set the pace for the first half of the 20-lap Main Event. On Lap 3, Villopoto moved past Reed into second and set his sights on Millsaps out front. One lap later, Dungey moved into podium position.

Mere bike lengths separated Millsaps and Villopoto for the next eight laps with Villopoto attempting to slip by his championship rival on several occasions. On Lap 11 just after the finish, Villopoto slipped inside Millsaps and was able to take over the position. Once out front, Villopoto pulled away for his 31st career 450SX Class victory and became the first rider to win back-to-back races in Toronto during the six years the Rogers Centre has been a stop on the Monster Energy Supercross schedule.

“It was unbelievable,” exclaimed Villopoto. “Davi is riding really well and he was riding exceptionally well [tonight]. I got around him with about halfway to go [in the Main Event] and I was able to get a little bit of a gap. Everybody up here [on the podium] is unbelievable and it shows how fast we really are when we run a pace like that on a track that was so [difficult].”

Millsaps went unchallenged en route to a runner-up effort, signifying his first podium finish since a third-place effort in Atlanta four races ago.

“It was definitely a good race,” said Millsaps. “I got off to a pretty good start and I just tried to ride my own race as much as I could. I made a lot of mistakes here and there, and throughout the first half of the race. Ryan eventually got by me and I did the best I could to keep up and do whatever I could.”

Shortly after Villopoto took over the lead, Dungey stalled his bike while trying to close the gap on Millsaps, losing the third spot to Reed. Just a couple laps later, Dungey reclaimed the position to secure his third consecutive podium finish.

Villopoto now carries a 12-point lead over Millsaps into the 13th race of the season. Dungey sits 22 points out of the lead in third.

On Lap 2, DeCotis crashed out of second, allowing both Wharton and Hahn to gain a position on the track. Before long, Wharton and Hahn began to battle for second, which helped Musquin extend his lead. On Lap 6, Hahn made the move for the position and attempted to catch Musquin out front.

The French rider maintained his advantage for the remainder of the 15-lap Main Event and won by over three seconds. Prior to the 2013 season, Musquin had never won a Monster Energy Supercross Main Event, but now he has won three in-a-row and is closing in on the lead in the championship.

“Today my confidence wasn’t so much there because I had a crash [in practice],” said Musquin. “But I really need to thank the team, because they are better than me and helped push me tonight. It was a tough day. I had a great start [in the Main Event] and it’s such a good feeling when you’re hurting because you don’t know what’s going to happen. It was great.”

Hahn, the current championship leader, minimized the damage done to his lead in the standings by finishing second. Wharton held off a late charge by MyPlash/Metal Mulisha/Star Yamaha’s Jeremy Martin to finish third.

“I need to get my starts back, it’s killing me right now,” said Hahn. “I’ve got to turn my brain back on and I’ve got to get back on that top step [of the podium] where I belong.”

Hahn’s lead in the Eastern Regional Championship now sits at six points over Musquin as both riders search for their first career Monster Energy Supercross titles.

Monster Energy Supercross will observe the Easter holiday next weekend before returning to action on Saturday, April 6, from Houston’s Reliant Stadium. The action for the 13th race of the 2013 season will kick off at 8 p.m. ET. SPEED will provide live coverage of the race, beginning at at 8:30 p.m. ET.