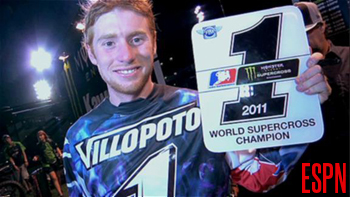 SALT LAKE CITY (April 27, 2013) – After an intense three-rider battle that lasted the entire Main Event, Monster Energy Kawasaki’s Ryan Villopoto secured his third consecutive Monster Energy AMA Supercross, an FIM World Championship, on Saturday night in front of a crowd of 43,149 inside Salt Lake City’s Rice-Eccles Stadium. Villopoto needed his 450SX Class-leading ninth win of the season, and the 33rd win of his career, in order to achieve the feat. Rockstar Energy Racing’s Jason Anderson broke through to win his first career 250SX Class Main Event on a wild night in the Western Regional Championship.

Red Bull KTM’s Ryan Dungey was the first rider out of the gate in the 450SX Class Main Event, claiming the Nuclear Cowboyz® Holeshot Award with Villopoto alongside. The champion wasted little time in making a pass on Dungey for the lead and then set a torrid pace over the opening laps to open a two-plus second advantage.

Millsaps got alongside Dungey on Lap 2 and made the pass for second, setting his sights on Villopoto. Eventually, Millsaps and Dungey closed the gap on Villopoto following the halfway point with all three riders sitting within a second of one another at one point. Millsaps had an opportunity to make a move for the lead, but Villopoto withstood the pressure and the difficulty of getting through lapped traffic to lead all 20 laps and clinch the title on a high note.

“It’s unreal,” said Villopoto, who tied his career best total of nine wins in a season. “It was a crazy race and the track was really technical. Any little mistake would make it anyone’s game. We [Monster Energy Kawasaki] started the season off really rough and had a lot of stepping stones to overcome, but we did it as a team and we did it well.”

Millsaps overcame a start outside the top five to finish second, with Dungey in third. The pair sits second and third in the championship, respectively, and are separated by three points heading into the final race of the season next weekend.

In the Western Regional 250SX Class Championship Main Event, GEICO Honda’s Zach Osborne captured the Nuclear Cowboyz Holeshot Award with teammate Eli Tomac and Anderson closely behind. Anderson made a quick pass on Tomac prior to the conclusion of the opening lap and then passed Osborne for the lead on the following lap.

As Anderson started pulling away, Tomac started to go in the opposite direction. The winningest rider in the Western Regional Championship this season had the opportunity to take over the points lead after Red Bull KTM’s Ken Roczen failed to qualify for the Main Event. However, Tomac continued to lose positions, eventually dropping to ninth place.

Out front, Anderson won by over five seconds, leading every lap of the Main Event.

“It’s crazy,” exclaimed Anderson. “The last five laps were definitely tough to be out front. To come out with a win, I’m stoked. This team has been there for me from the beginning and to get a win for them is awesome. I always seem to race well here [in Salt Lake City]. I’m not sure what it is, but I like it.”

Troy Lee Designs/Lucas Oil Honda’s Cole Seely charged to a runner-up finish, while Monster Energy/Pro Circuit/Kawasaki’s Martin Davalos overcame a start outside the top 10 to finish third. Tomac rebounded from his early difficulties to battle his way to a sixth-place result.

“I started the race in second, but just blew it in the whoops,” said Tomac. “It was a section that just got me all day. There were a couple passes where I got through them ok, but there were others where I got wild and out of control.”

“It was a bad night, definitely not what I came here to do,” said Roczen, whose crashes in the Heat Race and Last Chance Qualifier prevented him from making the Main Event.

“I wanted to finish the season off strong, not with a DNF at the second-to-last race. As much as I had bad luck tonight, I did get a little break with Tomac finishing sixth, so I still have the championship lead going into Las Vegas [season finale] next weekend. I will need to ride the race of my life there.”

Roczen entered the night with a 20-point advantage over Tomac, but now just five points separates the duo heading into the final stop of the Western Regional 250SX Class Championship. 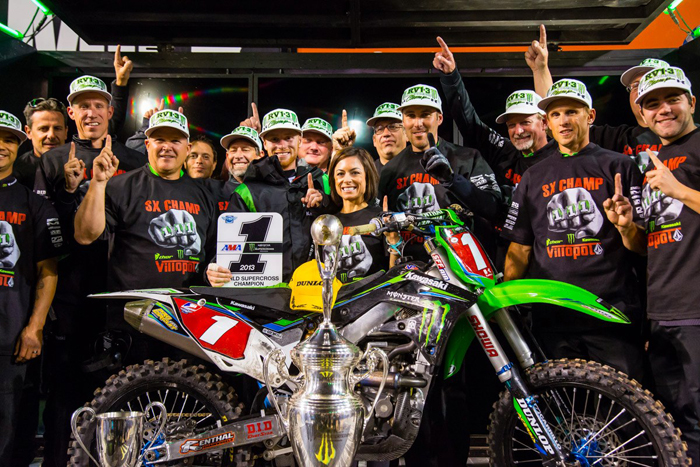 Monster Energy Supercross will bring the 2013 season to a close next weekend from Las Vegas’ Sam Boyd Stadium on Saturday, May 4.

Supercross LIVE!® is back in 2013 with a three-hour mid-raceday program from 2:00 – 5:00 p.m. local time. Hosts, Jim Holley, a former World Supercross Champion, and Kevin Barnett, a former member of the U.S. Men’s Olympic Volleyball Team and professional broadcaster, will provide in-depth analysis of the afternoon’s practice and qualifying sessions as the riders and teams prepare for the night racing, in addition to interviews and behind-the-scenes coverage. As the only place to follow live practice and qualifying coverage from Monster Energy Supercross, Supercross LIVE! provides fans with an inside perspective before the gate drops on the night’s qualifying and Main Events.  Additionally, there will be video snippets made available throughout the race day that can be viewed on www.SupercrossOnline.com, the official website of Monster Energy Supercross, or the YouTube Channel www.YouTube.com/SupercrossLive. To access the live streaming broadcasts, go to www.SupercrossOnline.com/SupercrossLive or subscribe to the Supercross LIVE! streaming channel at http://new.LiveStream.com/Supercrosslive.