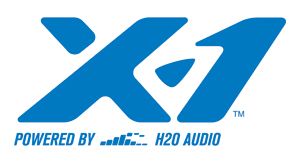 SAN DIEGO, Calif. (May 15, 2013) – X-1 Audio, the leader in waterproof and sweatproof headphones, cases and accessories shows its continued commitment to the endurance and paddling communities with the announcement  of Olympic triathles Laura and Greg Bennett and World-Champion Stand Up Paddler Slater Trout on their athlete roster. The company, at the forefront of personal audio solutions for athletes , introduces Slater and the Bennetts as the brand’s X-1 Team Ambassadors for 2013.
Dana Swanson, X-1 Marketing Director, stated “It’s a natural fit. Greg and Laura are two of the most recognizable triathletes in the world, and X-1 is the perfect partner for their high caliber training and competition needs. Slater is also highly accomplished in the waterman community across SUP, surf, and outrigger canoeing. These athletes really push themselves in their respective sports, and we’re excited to support them.”
Greg Bennett holds six World Cup titles, and was ranked the number one triathlete in 2002 and 2003. Bennett competed at the second Olympic triathlon at the 2004 Summer Olympics and won the Life Time series for three consecutive years in 2006, 2007 and 2008. Bennett placed second in the 2009 Life Time Fitness series after recovering from a training accident the prior year, then went on to win the Ironman 5150 Championship in 2011 and three Ironman 70.3 titles.  He still holds the record as all time prize money leader for Triathlon.

Laura Bennett, also a world champion triathlete, has competed on the International Triathlon Union racing circuit since 2001, earning medals at the 2003, 2004, 2005 and 2007 World Triathlon Championships. She was the first American to qualify for the 2008 Olympic Triathlon team, placing fourth at the games. Bennett was selected as the 2010 Olympic/ITU Female Athlete of the Year for her consistent performances and end of season ranking during the 2010 racing season, as well as ranking first in the 2010 swim rankings.

Maui, Hawaii-based Slater Trout, named “2010 Junior of the Year” by the Stand Up Journal, is a six-time podium finisher at the famous Gerry Lopez-Rainbow Sandals Battle of the Paddle (known as the World Championships of Stand Up). Slater was named US Champion in the 2012 Hennessey’s Paddleboard Championships, 14ft. Men’s Elite Class, and earned the title of Trials Winner of the first stop of the 2010 Stand Up World Tour.

About X-1 Powered by H20 Audio
Breaking the barriers of sound. Powered by H20 Audio technology, X-1 creates the most advanced audio solutions for athletes. With seven patents and over a decade of technological innovation, H20 Audio, the foremost leader in headphones, cases and accessories for aquatic athletes, has evolved to the next level as X-1. Designed for all athletes, X-1 offers audio solutions to harness the power of music regardless of sport or climate. For more information or to shop online, visit www.X-1.com