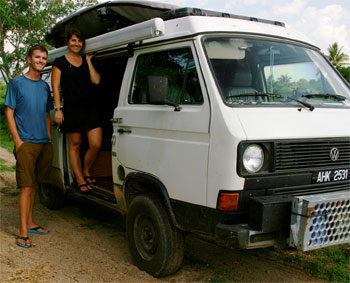 Laguna Hills, CA (May 20, 2013) – Freewaters, makers of casual and conscious footwear, announces new brand ambassadors, Brad and Sheena Van Orden of Drive Nacho Drive.  Since 2011, these global citizens have been circumnavigating the planet in their customized 1984 Volkswagen Vanagon named “Nacho” to discover new cultures, food, recreation, friendly faces and do a little good along the way.  Freewaters is pledging to support a sustainable community water project that they come across or initiate during their global voyage.

“Brad and Sheena (and of course Nacho) epitomize what the Freewaters ethos is all about: the freedom of travel and road tripping, being global citizens and daring to chart one’s own path in life,” says Freewaters Co-Founder Eli Marmar.  “The long and rugged quality of their trip makes them ideal product testers and brand messengers.  We have a ton of respect for what they are doing and are very happy to have them as ambassadors.”

With their shared interest in clean drinking water technology, Freewaters and Drive Nacho Drive will be joining forces on a community water project during their trip.  “My jaw hit the floor when Brad told me that he was a mechanical engineer and that he outfitted Nacho with an onboard water filtration and UV system that is solar powered,” comments Marmar.  “Given the unscripted nature of their trip, we have taken a very organic approach on the potential project.  We are pledging to support a community water project that they come across or initiate during their travels.  The only parameters are that it be in a community of real need and that it is sustainable.  We are very excited to see how this unfolds.” 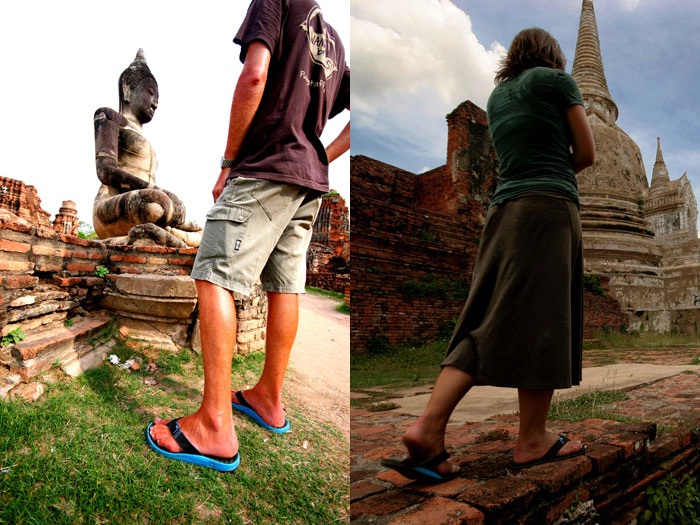 In planning and preparing for their epic journey, the former Gore-Tex employees scrapped everyday luxuries and cut their budget to the bare minimum for two years.  Hitting the open road in 2011, the first leg of their journey took them southward through Mexico, ultimately heading all the way to the southernmost tip of Argentina.  Now with sixteen months under their belt and nearly one hundred thousand miles logged by land and sea, Drive Nacho Drive is currently cruising throughout Southeast Asia with plans to head to China, Tibet, Nepal, India, and Sri Lanka. This leg of the journey will also take them even farther west through the old Soviet Republics, Georgia, Turkey, and then onward into Europe.

“When we heard about what Freewaters was doing with sustainable water projects, it immediately resonated with us,” Brad Van Orden said. “Besides both of us having worked in the outdoor industry, I also have a background in engineering in the renewable energy industry. The opportunity for us to organize a sustainable drinking water project during our adventure is really exciting. This is our passion, and together we can do a lot of good.”

Drive Nacho Drive is currently putting the finishing touches on their debut book, describing their travels through Mexico and South America.  Plans to release a sequel chronicling the second leg of their expedition through Asia and Europe are in the works as well.  Before this can happen, the couple is working out a few routing kinks. Standing between them and Europe is a quagmire of closed borders, shifting political situations, and costly travel permits. We’re excited to see the adventure unfold as they navigate their way westward.

Exact timing for Nacho’s return to the United States is still up in the air, but the duo is planning to complete the voyage within the next two years. Follow their adventures and learn more about how you can help Nacho keep on truckin’ at http://www.drivenachodrive.com.

About Freewaters
Freewaters, founded by Martin Kim and Eli Marmar in 2010, makes innovative and easy-going footwear that transport you into vacation mode the minute you slip them on.  Each pair helps support clean drinking water projects, as Freewaters believes that access to clean drinking water is a fundamental human right.   Freewaters products and ethos are dedicated to those that seek the freedom of travel, act as global citizens and dare to chart their own path in life.  Visit www.freewaters.com to view our complete product line.