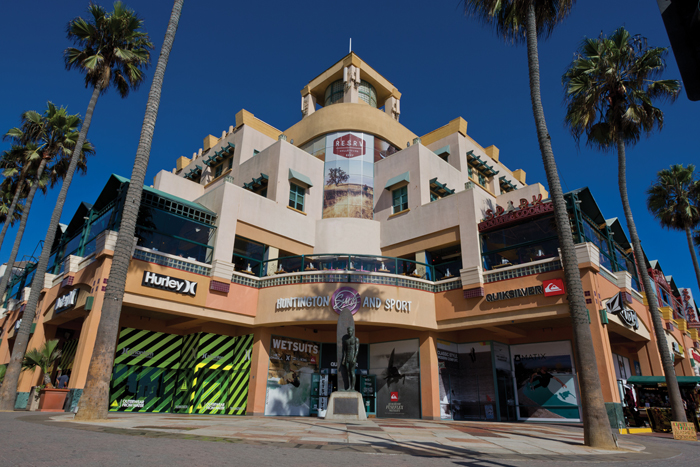 HUNTINGTON BEACH, Calif. – The ultimate surf shop, built and run by surfers for surfers, is taking the surf retail experience to a new level in 2013.  Huntington Surf and Sport is in the midst of a major renovation at its downtown Pierside Pavilion location, adding more than 3,000 square feet and a new energy to this iconic store.  Upon completion, HSS will offer the largest inventory and best selection of hardgoods in the entire surf industry; a haven for real surfers to get authentic gear.  Information is available at www.hsssurf.com/.

The major changes to HSS come amidst its 35th anniversary celebration and a re-dedication to being the “best surf shop in the world.”  The extensive remodel is rolling out in three distinct phases and began with the completion of a “Vans’ Store” within HSS earlier this year.  A massive new wetsuit room strategically located for ease of access and featuring hundreds of designs by all the top brands just opened on July 1st.  The third and most dramatic change begins in September when HSS “blows out” all of their front-facing walls on Main and PCH streets, and expands the store 15 feet to the existing drip line.

Huntington Surf and Sport was founded in 1978 at PCH and 15th street.  Aaron Pai, a 23 year-old northside regular was the first employee hired and earned $2.25 per hour selling wax, T-shirts and surfboards.  The next year, “AP” was offered an opportunity to purchase the store, which already had built a strong, local following.  He borrowed $60,000 from his parents and purchased the business.  Aaron took his love of surfing and began to shape the foundation of what is now considered by many industry insiders to be ground zero of the surf retail world.

For more than three decades, AP has worked tirelessly to ensure that HSS Pierside (and three other stores in HB) captures the essence of the surfing culture at its retail best.  Born in Honolulu, Hawaii in 1955, he learned to surf at Waikiki and was taught the true “Aloha Spirit” and importance of family from his Grandma Choi before moving to Huntington Beach in 1972.  “It’s all about the love of the sport and sharing it with people,” said Pai.  “We’re not about the sale; we’re all about helping people and providing what’s right for them.  The sale is just the fruit of helping people.”

In the late 1980s HSS fought a fierce battle with other competitors to land a new location at Main Street and PCH.  On July 1, 1990 Huntington Surf and Sport opened an ultra-modern, “core” surf shop right across the street from the venerable HB Pier.  Huntington Beach lures more than 15 million visitors annually; almost one million to the pier during the U.S. Open of Surfing alone.  More than 50,000 cars pass by HSS daily and the foot traffic nearly equals that during the summer months.  This amazing location brought instant awareness, but Aaron Pai felt a responsibility to represent the sport in a way that non-core retailers can’t.

A tremendous amount of thought and creativity go into displays and merchandising, ensuring that they are both visually appealing and functional for surf enthusiasts.  Before warranties even existed, HSS would offer repairs or replacements on faulty products.  Java Point provides the best coffee in Huntington Beach and fuels many a dawn patroller.  For years the store has supported the Huntington Beach High School surf team and local rippers from Jeff Deffenbaugh to Brett Simpson and Courtney Conlogue.  And among AP’s most heartfelt achievements is the Surfers’ Hall of Fame, a surfer’s version of Mann’s Chinese Theater.  Annually, tens of thousands of visitors walk among the hand and footprints of legendary surfers from Kelly Slater and Laird Hamilton to Jack O’Neill, Sean Collins and Lisa Andersen.

Over the years, Huntington Surf and Sport has carried every top brand in surfing.  And it’s a well-known truism that a manufacturer has truly arrived on the big stage if HSS carries its line.  The shop prides itself on a huge selection of surfboards by all the top shapers, while sprinkling in renowned locals as well.  According to legend, in 1979 AP fronted the money to Bob Hurley, another northside alumnus, so he could shape eight Hurley Surfboards for the store.  “Needless to say, I was blown away at his belief in others,” Hurley told Surfline.com.  “He was the first dealer for Hurley Surfboards and I am forever grateful.  Aaron and the crew believe in surfing and they believe in people.”

The love for surfing and wanting to give back has made Pai and his staff successful.  But Aaron Pai and his family remain surfers, first and foremost.  Many of the store’s customers are family and friends—folks the Pai’s have known for decades.  “When I walk into the store, the smell of wax and wetsuits still intrigues me,” said AP.  “It’s like a candy store seeing the rows of surfboards and leashes.”  The remodel will, no doubt, only add to that stoke and energy for another 35 years!